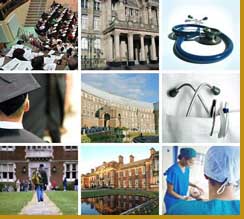 The public sector refers to the part of the economy concerned with providing various government services. The composition of the public sector varies by country, but in most countries the public sector includes such services as the military, police, public transit and care of public roads, public education, along with health care and those working for the government itself, such as elected officials.

The public sector might provide services that non-payer cannot be excluded from (such as street lighting), services which benefit all of society rather than just the individual who uses the service (such as public education), and services that encourage equal opportunity.

The part of national economy providing basic goods or services that are either not, or cannot be, provided by the private sector. It consists of national and local governments, their agencies, and their chartered bodies. The public sector is one of the largest sectors of any economy.

In the public sector, the business case is argued in terms of Cost–benefit analysis, which may include both financial and non-financial cost and benefits. This allows the business to take into account societal and environmental benefits, allowing a more comprehensive understanding of economic impacts.

Industries such as railways, coal mining, steel, banking, and insurance have been nationalized for ideological reasons, while another group, such as armaments and aircraft manufacture, have been brought into the public sector for strategic reasons. In communist countries most forms of production, commerce, and finance belong to the state; in many newly independent and less-developed countries, there is a very large public-enterprise sector.

The public sector overlaps with the private sector in producing or providing certain goods and services. The extent of this overlap varies from country to country, state to state, province to province, and city to city.

Direct administration funded through taxation; the delivering organisation generally has no specific requirement to meet commercial success criteria, and production decisions are determined by government.

Publicly owned corporations (in some contexts, especially manufacturing, “state-owned enterprises”); which differ from direct administration in that they have greater commercial freedoms and are expected to operate according to commercial criteria, and production decisions are not generally taken by government (although goals may be set for them by government).

Complete outsourcing or contracting out, with a privately owned corporation delivering the entire service on behalf of government. This may be considered a mixture of private sector operations with public ownership of assets, although in some forms the private sector’s control and risk is so great that the service may no longer be considered part of the public sector.