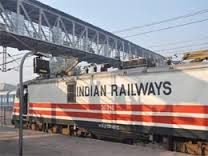 Indian Railway is an Indian state-owned enterprise, owned and operated by the Government of India through the Ministry of Railways. It is one of the world’s largest railway networks. Indian Railways is the world’s ninth largest commercial or utility employer.

Railways were first introduced to India in 1853 from Bombay to Thane. In 1951 the systems were nationalised as one unit, the Indian Railways, becoming one of the largest networks in the world. IR operates both long distance and suburban rail systems on a multi-gauge network of broad, metre and narrow gauges. It also owns locomotive and coach production facilities at several places in India and is assigned codes identifying their gauge, kind of power and type of operation. Its operations cover twenty-nine states and seven union territories and also provides limited international services to Nepal, Bangladesh and Pakistan.

In 1951 the systems were nationalised as one unit—Indian Railways—to form one of the largest networks in the world. The broad gauge is the majority and original standard gauge in India; more recent networks of metre and narrow gauge are being replaced by broad gauge under Project Unigauge. The steam locomotives have been replaced over the years with diesel and electric locomotives.

A British engineer, Robert Maitland Brereton, was responsible for the expansion of the railways from 1857 onwards. The Calcutta-Allahabad-Delhi line was completed by 1864. The Allahabad-Jabalpur branch line of the East Indian Railway opened in June 1867. Brereton was responsible for linking this with the Great Indian Peninsula Railway, resulting in a combined network of 6,400 km (4,000 mi). It became possible to travel directly from Bombay to Calcutta via Allahabad. This route was officially opened on 7 March 1870 and it was part of the inspiration for French writer Jules Verne’s book Around the World in Eighty Days.

At the opening ceremony, the Viceroy Lord Mayo concluded that “it was thought desirable that, if possible, at the earliest possible moment, the whole country should be covered with a network of lines in a uniform system”.

In 1985, steam locomotives were phased out. India had started building its own  locomotives and in 1896 sent engineers and locomotives to help build the Uganda Railways. In 1987, computerization of reservation first was carried out in Bombay and in 1989 the train numbers were standardised to four digits. In 1995, the entire railway reservation was computerised through the railway’s internet. In 1998, the Konkan Railway was opened, spanning difficult terrain through the Western Ghats. In 1984 Kolkata became the first Indian city to get a metro rail system, followed by the Delhi Metro in 2002 and Bangalore’s Namma Metro in 2011. Many other Indian cities are currently planning urban rapid transit systems.

Must Read: 20 Reasons to Be Proud of Indian Railways

The World’s longest railway platforms are