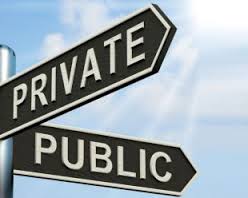 Privatization is the process of transferring ownership of a business, enterprise, agency, public service, or public property from the public sector (a government) to the private sector, either to a business that operates for a profit or to a non-profit organization. It may also mean government outsourcing of services or functions to private firms as revenue collection, law enforcement, and prison management.

Privatization has also been used to describe two unrelated transactions. The first is the buying of all outstanding shares of a publicly traded company by a single entity, making the company privately owned. This is often described as private equity. The second is a demutualization of a mutual organization or cooperative to form a joint-stock company.

There are four main methods of privatization

Privatization has mainly occurred in the transition economies of Central and Eastern Europe, such as Russia, Poland, the Czech Republic, and Slovakia. The transition from a publicly traded and owned company to a company which is privately owned and no longer trades publicly on a stock exchange. When a publicly traded company becomes private, investors can no longer purchase a stake in that company.

The privatization of publicly owned operations is the estimated increases in efficiency that can result from private ownership. The increased efficiency is thought to come from the greater importance private owners tend to place on profit maximization as compared to government, which tends to be less concerned about profits.

Most companies start as private companies funded by a small group of investors. As they grow in size, they will often access the equity market for financing or ownership transfer through the sale of shares. In some cases, the process is subsequently reversed when a group of investors or private company purchases all of the shares in a public company, making the company private and, therefore, removing it from the stock market.

Most Interesting Facts About Stock Market

Company – Definition and its features