My account
Get into your account.
LoginRegister
Plans
Home Guidance How To Prepare Motivational Quotes to Overcome the Fear of Failure 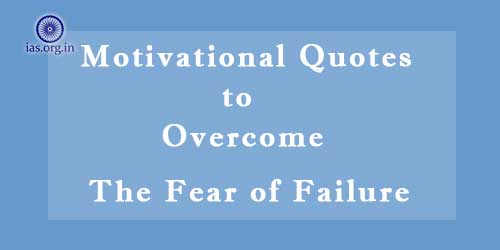 Every person on earth have embraced failure with open arms. No one surely can live their life without failing because success comes after failing. We come to learn many new things after failing.

Have a Look: How to Overcome the Fear of Failure?

Here are some Motivational Quotes to Overcome the Fear of Failure

“Success is most often achieved by those who don’t know that failure is inevitable.” – Coco Chanel

“Only those who dare to fail greatly can ever achieve greatly.” – Robert F. Kennedy

“If you’re not prepared to be wrong, you’ll never come up with anything original.” – Ken Robinson

“Giving up is the only sure way to fail.” – Gena Showalter

“Failure should be our teacher, not our undertaker. Failure is delay, not defeat. It is a temporary detour, not a dead end. Failure is something we can avoid only by saying nothing, doing nothing, and being nothing.” – Denis Waitley

“It’s failure that gives you the proper perspective on success.” – Ellen DeGeneres

“Success is not final, failure is not fatal: it is the courage to continue that counts.” – Winston Churchill

“There is only one thing that makes a dream impossible to achieve: the fear of failure.” – Paulo Coelho

“I’d rather be partly great than entirely useless.” – Neal Shusterman

“Winners are not afraid of losing. But losers are. Failure is part of the process of success. People who avoid failure also avoid success.” – Robert T. Kiyosaki

“What is the point of being alive if you don’t at least try to do something remarkable?” – John Green

“Success is a state of mind. If you want success, start thinking of yourself as a success.” ― Joyce Brothers

“It is fine to celebrate success, but it is more important to heed the lessons of failure.” – Bill Gates

“Think like a queen. A queen is not afraid to fail. Failing is another steppingstone to greatness.” – Oprah Winfrey

“Remember that failure is an event, not a person.” – Zig Ziglar

Also Read: 10 quotes from our beloved Dr. Kalam that will Inspire us always

The greatest mistake you can make in life is to be continually fearing you will make one. – Elbert Hubbard

One who fears failure limits his activities. Failure is only the opportunity to more intelligently begin again. – Henry Ford

The greatest glory in living lies not in never falling, but in rising every time we fall. – Ralph Waldo Emerson

“Mistakes are the portals of discovery.” — James Joyce

“Failure is the condiment that gives success its flavor.” — Truman Capote

“I think you have to try and fail, because failure gets you closer to what you’re good at. — Louis C.K

“I can accept failure, everyone fails at something. But I can’t accept not trying.” — Michael Jordan

“Please know that I am aware of the hazards. I want to do it because I want to do it. Women must try to do things as men have tried. When they fail, their failure must be a challenge to others.” — Amelia Earhart

“We need to accept that we won’t always make the right decisions, that we’ll screw up royally sometimes—understanding that failure is not the opposite of success, it’s part of success.” — Arianna Huffington

“You have to be able to accept failure to get better.” — Lebron James

“Do not fear mistakes. You will know failure. Continue to reach out.” — Benjamin Franklin

“Failures, repeated failures, are finger posts on the road to achievement. One fails forward toward success.” — C.S. Lewis

“My great concern is not whether you have failed, but whether you are content with your failure.” — Abraham Lincoln

You May Also Love to Read: 10 Ways to Overcome Exam Fear

“Failure happens all the time. It happens every day in practice. What makes you better is how you react to it.” — Mia Hamm

“Many of life’s failures are people who did not realize how close they were to success when they gave up.” — Thomas Edison

“A person who never made a mistake never tried anything new.” — Albert Einstein

“Defeat is not the worst of failures. Not to have tried is the true failure.” George Edward Woodberry

“Do one thing every day that scares you.” Eleanor Roosevelt

“Experience teaches slowly, and at the cost of mistakes.” James A. Froude

“Our greatest glory is not in never falling, but in rising every time we fall.” Confucius

“The only failure is not to try.” George Clooney

“Failure is the key to success; each mistake teaches us something.” Morihei Ueshiba

“The only real failure in life is not to be true to the best one knows.” Buddha

Don’t Miss: How to Overcome Frustration?