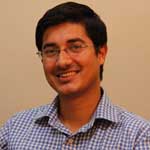 Setting an example for IAS aspirants, Rishav Gupta secured 37th rank in Civil Services Examination 2013 in his second attempt for the most prestigious position of Indian Administrative Services (IAS). Rishav’s strong determination led him to become an IAS officer. Becoming an IAS offficer was the result of his, true struggle and hardwork.

Rishav Gupta’s aim in life is to serve the society as long as he can. On the question of his role model, he replied that Rishav Gupta is deeply influenced by the lives of Swami Vivekananda, N. R. Narayana Murthy (the founding person of Infosys) and E.Sreedharan (the Metro-Man of India).

On getting success in the UPSC Exam 2013, Rishav Gupta says, “I was feeling very good because all of my investment in all the senses converted into a fruitful result and I am thankful to all of my teachers.”

Must Read: Read UPSC Board Interview of Akash Patel IAS

Rishav Gupta comes from a simple family background. His father is an engineer at Central Public Works Department (CPWD). His mother is a housemaker and he has one elder brother and he is a Hardware Engineer.

Rishav Gupta did his high School from the St. Xavier’s High School, Panchkula with 95.8% marks in 2004 and his Intermediate from Moti Ram Arya Sr. Sec School, Chandigarh with 89% marks in 2006. After completing his schooling he did Bachelor of Technology (B.Tech) in Electrical and Electronics Engineering from Indian Institute of Technology, Delhi (IIT-Delhi) in 2010.

Rishav Gupta wanted to become Civil Servant since his Engineering days. Playing Chess, Reading Books and Internet Surfing are some of his numerous hobbies.

He worked with Royal Bank of Scotland thereafter as a Software Analyst in its Global Banking and Markets division. He also worked at Augment Systems as software engineer. Also at IITians Pace as Physics Professor.

Rishav Gupta just could not make his place in the result list of 2012 in his first attempt. So he tried again second attempt in 2013 and got selected in Indian Forest Services with All India Rank 7. Also, for Civil Services Examination, he ranked 37th in the general list.

Rishav Gupta said that the coaching institutes helps the candidates in providing the right path but it is the sheer hard work of the candidates which ensure the success in the IAS Examination but at the same time he also said that they are not indispensible for the candidates. Rishav Gupta said that internet is indispensible for the Civil Services Examination preparation but also highlighted the probability of ending up in time wastage on internet. He underlined the importance of the good newspaper such as The Hindu and The Indian Express.

The candidates should keep a flexible mindset to keep pace with the changes brought in by UPSC. The candidates should be capable enough to make a good answer irrespective of the format, word limit, time limit and the marks of the questions. So flexibility is necessary to achieve the success in the IAS Exam.