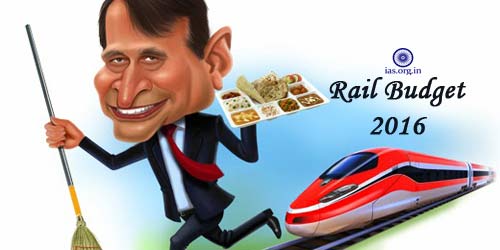 The Salient Features of the Railway budget are:

In Railway Budget 2016-17 passenger Fares and Fright rates have not been changed, giving relief to the millions of commuters as it was being anticipated that passenger Fares might be increased this time.

It was informed that India Railway has already started using World’s first Bio-vacuum toilet developed by itself in Diburgarh Rajdhani Express. It has been proposed that 17000 Bio toilets and additional toilets at 475 stations will be provided prior to the close of this year.

In order to check without ticket travelers, it is announced, the railways is going to introduce bar- coded tickets, scanners and gain control on pilot basis on major stations. It is also announced that the quota reserved for lower berth for senior citizens and women will be increased by 50 %.

It has been claimed that Indian Railway has opened long awaited Broad Gauge lumding – Silchar section in Assam, connecting Barak Valley with the rest of country.

To make the life simpler for the train travelers it is announced that the sale of tickets would be conducted through hand held terminals for the benefit of suburban and short- distance travelers; vending machine will be used to sell platform ticket through not only cash but also credit/debit cards.

It is announced that 139 helpline post verification using ‘One Time Password’ sent on registered phone number for the cancellation of reservation will be initiated by Railways.

To provide Tatkal Tickets to rightful passengers in the morning tatkal hours, Railways will install CCTV coverage at tatkal counters. It has been claimed that CCTV network has been provided at 311 railway stations.

Promises announced in the Railway Budget 2016

Also Read: 20 Reasons to Be Proud of Indian Railways