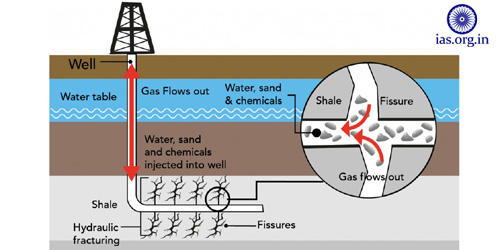 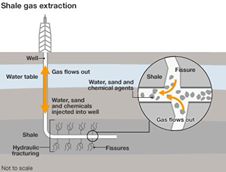 Developed economies like the USA has resorted to the Shale gas to meet their demand. There is a huge potential of shale gas in India as an alternate energy resource if exploited.

The Natural gas forms about 10% of the total commercial energy mix in India. But, the demand far exceeds the supply. A recent survey has found that many Gas plants in India producing electricity became stagnant due to the lack of supply of Natural gas and are operating with under capacity with the help of imported Natural gas.

The Indian Government has also stalled the construction of new gas plants until 2016.  This means electricity shortage will occur soon. Most of the gas produced from the largest gas basin of India, KRISHNA-GODAVARI GAS BASIN is consumed by the fertilizer industries and also output from this source dropped down.

Hence, there is an urgent need of finding an alternative gas resource to run all the sectors efficiently.

A new gas energy resource called SHALE GAS was explored by the USA in early 2000’s. By 2010, USA transformed from a net gas importer to an energy surplus country and also became self-sufficient in terms of Gas deposits. This has created excitement across all countries of the world.

According to the ENERGY INFORMATION ADMINISTRATION report, India’s shale gas reserves equals 96 trillion cubic feet which can supply for 26 years of the country’s Gas demand.

WHAT IS SHALE GAS?

Generally, Natural gas (Methane) can be classified into two heads

When the sedimentary basin rich in gas is drilled vertically, the gas migrates through porous rocks into the reservoir and flows freely to the surface where it is collected and piped to the users.

The natural gas that is used globally is the conventional natural gas.

The SHALE GAS is located in the rocks of very low permeability and cannot escape to the surface as easily as Conventional Natural gas. It is the type of Natural gas which is trapped in the shale formations. Shales are fine-grained sedimentary rocks which are rich sources of petroleum and natural gas.

Hence, different drilling method should be followed to recover the SHALE GAS.

PROCESS OF DRILLING FOR SHALE GAS:

However, in the month of February this year, OIL CORPORATION of INDIA attained permission from the government to drill out shale gas in the gas basins of ASSAM and ARUNACHAL PRADESH.

Shale gas is definitely going to be a useful additional energy resource for India. But the challenge lies in making it sustainable and safe.