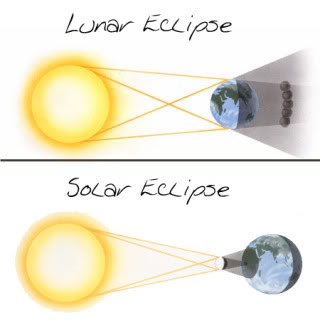 The difference between solar and lunar eclipse: The total or partial obscuration of Sun’s light from an observer on earth is called solar eclipse and that of the moon is called the Lunar eclipse.

Cause of solar eclipse:

When the Moon takes up such a position between earth and the Sun that it partially or completely obscures the light of the Sun, the solar eclipse  is caused. Total obscuration is a total eclipse and partial obscuration is a partial eclipse.
Read Also: Fascinating Facts about Moon

Cause of Lunar eclipse:

When the earth takes a position between the Sun and the Moon that it casts its shadow on the Moon, the Lunar eclipse is cause
Must Read:
Solar Eclipse &#8211; Everything You Need to Know
SOLAR AND LUNAR ECLIPSE