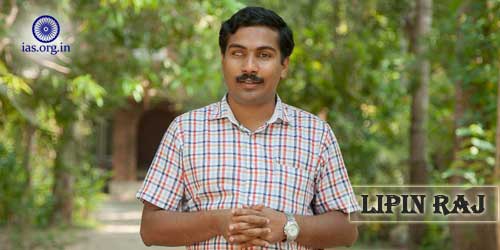 Lipin Raj, a visually Handicapped person,lost his vision partially in a childhood accident,who cleared Civil Services Examination in 2012 is a Writer, Pubic Speaker as well as a Social Outreacher. His success has set an example for several differently abled candidates aspiring to clear one of the toughest competitive exams in the country. Fighting against odds ranging from poverty to a troubled family life to deteriorating eyesight, Lipin Raj has realised his biggest dream at a young age of 24.

Lipin Raj was born at Naranganam, near Kozhencherry. His family had gone through many difficulties, and he believes that a series of coincidences have turned out to be the turning points in his life. His father had been an alcoholic and all problems of the family stemmed from it. The family, including his sister, Ligy P. Nair, brother, Vineshkumar, and mother, Leelamony, plunged into poverty and starvation.

His brother started working in an upholstery shop and sister began giving tutions to school children at home to support the family. Their father sold off his nearly 1.5-acre farmland. Hooligans started attacking their house, following quarrels with his father in toddy shops. The father even had even plans to sell their small house a day before he died when Lipin Raj was studying in Class X.

Lipin Raj had done his schooling at the Government High School and St. Thomas Higher Secondary School at Kozhencherry. Lipin scored 100 per cent marks in Malayalam in the higher secondary examinations. It was his teacher, Rajeswari, who had sown the seeds of reading in him while studying in Class IV. Though the medical advice was not to strain his left eye, Lipin became a voracious reader. The village library was his main source of books. He won many first prizes in poetry, essay and story-writing.

His acquaintance with Motty Cherian, owner of a photocopy centre in Kozhencherry, was what led to a major breakthrough in his professional pursuit. Mr. Cherian played a key role in making him a Civil Service aspirant, taking the initiative to send him to Mar Ivanios College, Thiruvananthapuram, to do a Bachelor of of Mass Communication and Video Production course and, thereafter, MA (Malayalam) from the Institute of Distance Education in Thiruvananthapuram.

To fund his studies,he took up the job of a part-time correspondent in a Malayalam daily. He worked as an internee in Malayala Manorama Daily and India vision Channel. After completing his degree in 2009, he wanted to go to Delhi and study further and to prepare for Civil Services Exam. But with no financial support from anywhere, he found it difficult to do so.

Just when hope seemed to recede, Lipin got a message from State Bank of Travancore that he had cleared a clerical test that he had written earlier. Soon he became a probationary officer in IDBI Bank. By then he had completed his Masters degree in History and Malayalam. Mr. Lipinraj joined IDBI Bank as an assistant manager at its Kadavanthra branch in Ernakulam in 2011.

Success in Civil Services has strengthened his resolve to serve the poor, the neglected and the differently abled people in the society. Lipinraj and the State had much to cheer about as he came first among candidates who have written all papers of the examination in Malayalam.

“I used to pray, looking skyward, when parent-teacher meetings come because my father used to quarrel even with teachers in an inebriated mood,” Lipin Raj says.

Inspired by Mr. Cherian, he took a short trip to Delhi for higher studies. But while waiting in the queue on the Jamia Millia University campus for paying the admission fee, he got a mobile alert that he had been selected for a clerical post in the State Bank of Travancore. Coming out of the queue the next moment, he returned and joined the bank in Pathanamthitta.

Have a Look: Inspirational UPSC Board Interview of Gokul GR IAS, AIR – 19

Lipin was in Class 4 when a silly act of one of his friends at school cost him the sight of his right eye. A sharp object thrown by a friend seriously injured it. Afraid of telling this to his alcoholic father, Lipin and his mother resorted to home remedies as they did not have the money for proper treatment. This worsened his condition and he lost the sight of his right eye. The injury was so serious that it later partly affected his left eyesight also.

Mr. Lipinraj had lost vision in his right eye at the age of 11 in an accident while playing with a hard object in their residential courtyard. The object thrown at a papaya tree boomeranged and pierced the pupil of the eye.

But the accident never dampened the spirit in the little boy. In Mr. Lipinraj’s own words, he started feeling the comfort of dim light as it elicits a feeling of freedom, self-determination and reduced inhibition, all of which encourage innovative thinking.

Lipin Raj opted for Public Administration and Malayalam Literature as his optional subject. The interest towards creative writing finally gave him a command over mother tongue. He opted for Malayalam as medium of writing and Public Administration as optional. For writing the answers, Lipin Raj chose his own way of writing including personal opinion in case of opinion-based questions.

Lipin Raj was almost diverted from the pattern of answer writing, especially in general studies and public Administration; he studied or prepared answers for Mains and gave himself the freedom of deviating from the expected framework of answers. So after the exam he thought that he did some injustice to this exam and probably wouldn’t appear in final list. He started preparing for the next year.