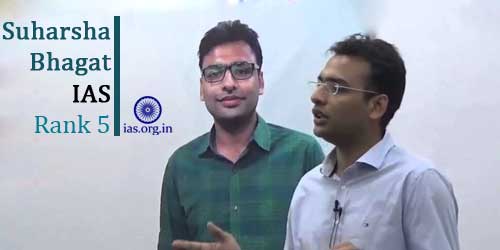 Suharsha Bhagat of Bihar has cracked the UPSC Exam and secured All India Rank 5 in the year 2015. Among the boys, Suharsha clinched the top rank and students from Bihar have once again proved their mettle in Civil Service Examination.

Must Read: Meet IAS Topper Mutyala Raju Revu and Read his answers to UPSC Board

Suharsha Bhagat passed Class X from Ramakrishna Mission Vidyapith at Deoghar (Jharkhand) and completed his  higher education from DPS at R K Puram in New Delhi. After which he got graduated by studying chemical engineering from Indian Institute of Technology (IIT) Bombay.

It was his dream to join Administrative Service since his college days at Bombay.

Suharsha Bhagat chose Geography as an optional subject. He said “he got the encouragement to join the administrative service from his father”. Though his background was science, his father and friends asked him to choose geography in the exam.

Suharsha attempted three times before and cleared the examinations and again he tried in 4th attempt and succeeded in UPSC Civil Services Examinations 2014-2015.