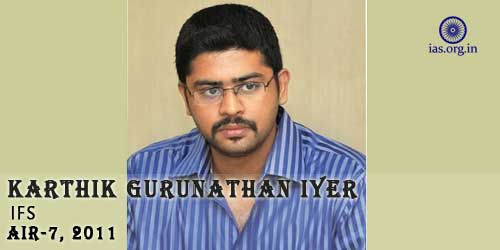 Karthik Gurunathan Iyer had only one burning ambition in life ie; making it to the Indian Foreign Services and he finally achieved it by scoring All India Rank 7th in Civil Services Exam conducted by Union Public Service Commission 2011 at the age of 22 years. Karthik Gurunathan Iyer is an icon and a true inspiration for the millions of Indian students and showed that nothing is impossible.

Karthik Gurunathan Iyer is born and brought up in Nagpur. The UPSC topper’s father, MR Gurunathan has retired from the Maharashtra State Textile Corporation in 2003 and mother Kamlam is working with Bharat Sanchar Nigam Ltd in Bangalore.

Even when Karthik Gurunathan Iyer was studying at Fergusson College, his only aim was to clear the Civil Services Examination. An MA from IGNOU was the means to achieve his aim. IGNOU was a good option because it has better structured programmes and outstanding course study material which was already popular among the IAS aspirants.

Aversion to join the corporate world and desire to serve society made him appear for the UPSC Examination. Iyer’s preference is the Indian Foreign Service as he believes he would get a chance to represent the country abroad.

Karthik Gurunathan Iyer did not join any coaching class. IGNOU notes were extensive and helped to lay a good foundation in Political Science & International Relations. This helped him to score well in the Mains.

While it took time and effort to complete reading the books, they surely boosted his performance by getting good marks in optional Political Science & International Relations subject. He used the text material for value addition in his answers and got very good scores. He have secured a total of 346 (181+165) in his two papers of the subject, and he believe his notes helped him achieve this.

Karthik Gurunathan Iyer cleared the CSE in his first attempt. Indian Foreign Service was his favourite one. From a very young age his ambition was to represent country as a diplomat one day.

22 year old Karthik Gurunathan Iyer had almost lost hope when he failed in the NDA medical test. With no coaching to his credit, the IAS topper cleared the exam in his first attempt and maintained that notes from IGNOU, which laid a good foundation for him in Political Science.

Must Read: Mohammed Ali Shihab IAS: An Inspiring Journey from Orphanage to UPSC

Karthik Gurunathan Iyer source of inspiration was his ambition to become a diplomat one day. He drew on all the setbacks he had received in life to give him energy. He tried his best to draw upon his past disappointments and anger into constructive study for UPSC examination, and that gave him plenty of energy!

Civil Services aspirants come from a diverse background, and one way of learning cannot be labelled a better choice for the entire category of aspirants. At the end of the day, we all need to find what works for us, and do things accordingly. Be honest to yourself, and back your potential to the fullest! The only thing that can overcome Hard Luck is Hard Work!!

Having appeared for the Exam with Political Science and History, his advice to aspirants is that hard work and dedication are the two keys to success. “The examination is not tough at all,” Karthik Gurunathan Iyer said.