My account
Get into your account.
LoginRegister
Plans
Home Stories Tea seller’s sons make it to IIT, again (A Must Read Story) 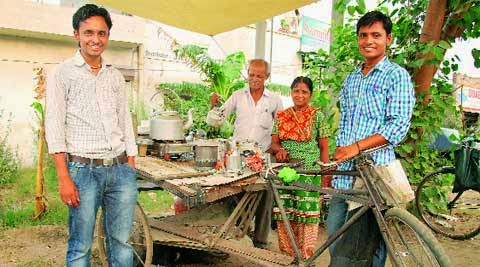 They cracked the prestigious IIT-Joint Entrance Examination last year but could not secure admission due to the poor financial condition of their family.

Amit and Sumit, sons of a tea seller, have cracked the examination this time again and hope to get admission into an IIT if luck favours them.

Their father Jatinder Kumar has been selling tea at Chuggiti Square near Amritsar bypass to those working at nearby factories and shops for the past 20 years.

Jatinder hails from Sita Mandi in Bihar and stays with his family in a small room at Laddowali.

Bearing the expenses of children’s studies along with taking care of his sick wife has been really difficult for him. But last year, Jatinder got injured and the responsibility of the family fell on the shoulders of young Amit and Sumit.

Alongside preparing for the IIT examination, they would run their father’s tea shop as well.

Sumit has secured 809th rank while Amit has got 2014th rank in the IIT-JEE examination.

As soon as the exam results were announced, people started approaching them and many even offered to sponsor their education.

Satish Verma, assistant general manager, State Bank of India, said the bank had decided to sanction a loan for the brother-duo and they would make it easier for them to apply and get loans anywhere.

He further said the bank has also opened an account for them and deposited Rs. 2,100 each in their account.

He further informed that the bank would handle all the expenses of Sumit and Amit when they go to New Delhi and Dhanbad for counselling.

SPS Marar, Phagwara civic body commissioner, said, “As soon as I came to know about the boys, I decided to contribute to their education. I have also asked some of my friends to contribute and they agreed. I will meet both the boys on Monday and see how I can help them.”

The family is overwhelmed after people of various walks of life have extended help to them.

“I am really grateful to God for showering so much happiness on us. I really appreciate that so many people are approaching us for help,” Sumit said.

“We attribute our success to our parents who despite great difficulties provided us education and stood by us all the time. We also thank our teachers for guiding us and teaching us without any fee,” he added.