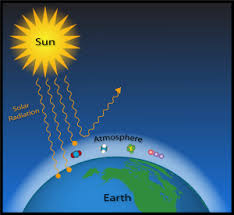 The greenhouse effect is a process by which thermal radiation from a planetary surface is absorbed by atmospheric greenhouse gases, and is re-radiated in all directions. Since part of this re-radiation is back towards the surface and the lower atmosphere, it results in an elevation of the average surface temperature above what it would be in the absence of the gases.

Solar radiation at the frequencies of visible light largely passes through the atmosphere to warm the planetary surface, which then emits this energy at the lower frequencies of infrared thermal radiation. Infrared radiation is absorbed by greenhouse gases, which in turn re-radiate much of the energy to the surface and lower atmosphere.

The existence of the greenhouse effect was argued for by Joseph Fourier in 1824. The argument and the evidence were further strengthened by Claude Pouillet in 1827 and 1838, and reasoned from experimental observations by John Tyndall in 1859, and more fully quantified by Svante Arrhenius in 1896.

The Earth receives energy from the Sun in the form UV, visible, and near-IR radiation, most of which passes through the atmosphere without being absorbed. Of the total amount of energy available at the Top of the Atmosphere (TOA), about 50% is absorbed in the Earth’s surface. Because it is warm, the surface radiates far IR thermal radiation that consists of wavelengths that are predominantly much longer than the wavelengths that were absorbed.

The major non-gas contributor to the Earth’s greenhouse effect, clouds, also absorb and emit infrared radiation and thus have an effect on radiative properties of the atmosphere.

In the Solar System, Mars, Venus, and the moon Titan also exhibit greenhouse effects; that on Venus is particularly large, due to its atmosphere, which consists mainly of dense carbon dioxide. Titan has an anti-greenhouse effect, in that its atmosphere absorbs solar radiation but is relatively transparent to infrared radiation.