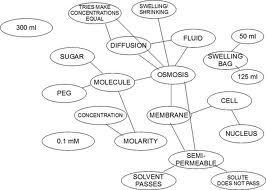 Osmosis has a number of life-preserving functions: it assists plants in receiving water, it helps in the preservation of fruit and meat, and is even used in kidney dialysis. In addition, osmosis can be reversed to remove salt and other impurities from water.

Plants depend on osmosis to move water from their roots to their leaves. The further toward the edge or the top of the plant, the greater the solute concentration, which creates a difference in osmotic pressure. This is known as osmotic potential, which draws water upward. Osmosis protects leaves against losing water through evaporation.

Osmosis is vital to life because of its function in maintaining equilibrium inside and outside of a cell.  However, conditions on a cell can sometimes cause problems.  If there is a high concentration, salt outside a plant, all the water from inside plant cells will diffuse outside of the plant and cause the plant cells to shrink in a process called plasmolysis.  An example of plasmolysis is the wilting of flowers after they are kept out of water for a time.  Because the water content in the plant goes down, the cells constrict through plasmolysis and the whole plant grows limp, as the cells aren’t as tightly packed in the plant and thus can’t support the weight of the leaves.

When there is a water shortage, however, other cells transmit signals to the guard cells that cause them to release their potassium. This decreases their osmotic potential, and water passes out of the guard cells to the thirsty cells around them. At the same time, the resultant shrinkage in the guard cells closes the stomata, decreasing the rate at which water transpires through them and preventing the plant from wilting.

To survive, every living cell must constantly take in the chemicals it needs and let out the ones it does not need through its thin membrane (casing). Cells do this in several ways, including osmosis, diffusion, and active transport.