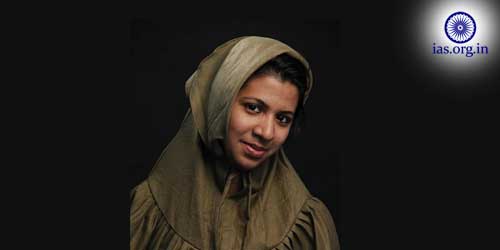 Zainab Sayeed, the first Muslim woman from West Bengal cracked the Civil Services Examination by achieving All India Rank 107 and has also topped the UPSC interview by scoring highest marks.

Interview is the last stage of the Civil Services Examination. Zainab Sayeed scored more than even the score of the first rank holder Ira Singhal. Ira scored 167 marks in the interview whereas Out of 275 marks, Zainab scored 220 in the interview that is 58 marks more than the top ranked Ira scored. She has made a record as the highest scorer in the interview round and ranked 107 in the examination.

Zainab Sayeed said that she hoped if she was allotted the Indian Administrative Service (IAS), it would be good for her if not then she would like to join the Indian Revenue and Customs Service.

Zainab Sayeed comes from Chitpur in North Kolkata and belongs to an elite Bohra Muslim family. Her father Taiyab Sayyed is a hardware businessman based in Kolkata; her mother Farida Sayyed is a homemaker and assists her husband’s business. Zainab is second daughter of her parents. Eldest sister Tasneem Sayyed is running her own consulting firm. Youngest daughter Fatima Sayeed is pursuing BDS from Jamia Millia Islamia University, Delhi. Zainab Sayeed got married to Hussain Izzy, a hardware businessman.

Zainab Sayeed parents were very supportive and encouraged her to go for UPSC. During preparation of the Civil Services Exam her husband played an important role in motivating her and he used to set the time table for her to study which was of great help for Zainab. She says she is lucky to have parents and husband who always encourage her to go ahead.

Zainab Sayeed got graduated in English from St Xavier’s College. Again she went to Delhi and enrolled at the AJK Mass Communication and Research Centre at the Jamia Millia Islamia and completed her Masters in Convergent Journalism in 2011. While pursuing Masters in Jamia, she simultaneously signed up at the Jamia’s coaching centre for the UPSC exam preparation.

When she returned back to Kolkata she got a job in the English daily ‘The Telegraph’. She worked in the editorial department of The Telegraph, Kolkata till her final UPSC results were out.

Zainab Sayeed of West Bengal has qualified UPSC Exam in her third attempt. She took the Civil Services Exam in 2012 and 2013, but could not clear the Prelims.

Zainab Sayeed set a target, studied hard and displaying strong determination achieved her goal. She devoted six to seven hours a day seriously for preparations and her punctuality paid off in the end.

Zainab Sayeed belongs to the Bohra community and wears the traditional ‘Rida’ since she was 13 years old. She wears “Rida, a headscarf, or Hijab every Bohra girl and woman wear”, and appeared for the UPSC personal interview in the same traditional attire.

The interviewers asked why she wore the attire which is a religious marker. She was neither ashamed nor apologetic. She said “Rida or Hijab is part and parcel of her persona. Besides there is a saying that one should wear clothes one feels comfortable in, she cited the instance of a Prime Minister who wore a turban which is also a religious symbolism”.