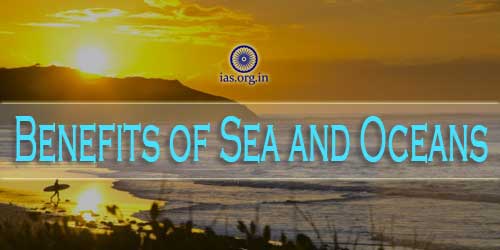 Although the words ‘ocean’ and ‘sea’ are generally interchanged, they can differ in meaning. In the names of only five bodies of water is the word ocean included; these five bodies of water are: the Atlantic, Pacific, Indian, Arctic, and Antarctic. So it can be simply put that Ocean are the bodies of salt water that extend between the continents.

Difference between a Sea and an Ocean

One continuous mass of sea water constitutes all the world’s oceans and seas. It is due to largeness of the ocean that humans have divided it up and named the different parts. There are five Oceans and several dozen seas. Seas are smaller than ocean and are partially surrounded by land. However, they are exactly the same thing.

All the oceans are linked together to form a single mass of salt water. The Seas connect the oceans of the world. Seas cover smaller areas the ocean, generally shallower, and are nearer to the land. There are dozens of seas; however, some of the main seas are:

It is important to mention here that the Red Sea in the Indian Ocean has the saltiest sea water in the world and it is also the warmest ocean. Part of the Red Sea is known as the Dead Sea. The Dead Sea is surrounded by a hot desert whose fierce heat causes sea water to evaporate faster and in greater qualities.

Must Read: The Earth and the Universe

Harvesting in the Sea for food

For ages, fish from the Sea has been on the staple diet of man. Fishing is considered to be one of the oldest occupations known to human beings.

Nowadays myriad efficient methods are used in fishing to catch fish; for instance, Sonar systems help boat in tracking shoals of fish. Trawlers haul nets across the sea-bed to catch fish that inhabit at the bottom. Drift netting includes hanging along net curtain across a stretch of sea. In the long-linking method fishes are caught on several pre-laid out long fishing lines.

Fishing boat on order to stay long at sea and supply large qualities of fish to factories clean and freeze the fish that is caught. A major Seaford, Shellfish, is now raised in farms under the sea; along with this Seaweed, used as food in Japan and China, is also raised in these farms.

Each year about 120 million tons of fish are caught. These catches include whales, the huge fish, that are hunted for meat and oil; smaller fish and Shellfish like lobster and Oyster. To trap everything on their path, dredgers and trawlers drag nets on the Seafloor.

However, may people, particularly environmentalists, are concerned that stocks of certain fish are becoming alarmingly low because of overfishing.

Farms under the Sea

Sounds amazing, but it is true; however, sans farmers or animals. Instead, some types of fish and shellfish are raised in special enclosures, the farms under the sea. They grow faster and bigger than normal in these farms because they are fed specially. The Japanese have developed seaweed farms as it is used in cooking for their food.

The Sea: Storehouse of Valuable Items

Apart from food the waters and rocks of sea, as a huge storehouse of valuable items, supply many chemicals and minerals useful in medicine and industry. Salt, iodine, magnesium and bromide are extracted from seawater.

Sand, gravel and tin and even diamonds are hauled up by dredging vessels from shallow seas. In many parts of the world oil and gas is piped up from the depth of the sea. Nowadays, in order to suck up millions of metallic lumps, called manganese nodules, from the ocean floor special ships are being developed. From manganese nodules are extracted not only manganese but also cobalt, copper, nickel, and other useful substances. In recent times an understanding among world communities has developed that as the mines on land is fast becoming exhausted, human beings would have to depend more and more on the mines of the sea.

Pearls in the Sea

Oysters and mussels while responding to irritation produce pearls. When between the oyster’s shell and skin gets a piece of grit (gravel or sand), natural pearls are formed; the phenomenon occurs when tissues surround the grit to produce mother-of-pearl layers. Pearls, however, are artificially produced by inserting particles into clam.

As huge quantities of sand and gravel are extracted from the seas for commercial purposes, the sea has become an important source of minerals; pearls come from oysters and diamonds are mined off the coast of Southwest Africa. Gold has also been mined off the Alaskan coast.

The largest pearl, weighted 6.86kg was found from the Philipines in 1936. It is now known as the Pearl of Lao-Tze.

Oil and gas reservoirs in the Sea

From prehistoric times plant and bacteria remains fell to the ocean floor and got gradually covered by layers of mud that under heat and pressure was converted to oil and gas which finally moved up through porous rocks to be trapped by Impermeable rocks.

Hidden in rocks on the seabed valuable resources of oil and gas can be trapped by drilling through the rocks. However, these rocks, first, must be located in water that is shallow enough for drilling to reach it, because only some kinds of rocks contain oil. In the process of identification of these reservoirs are used shock waves that are sent through the seabed and the returning signals distinguish between the layers of the rock.

Once the process of identification of the reservoirs concludes, temporary rigs are set up to ascertain whether the oil is of the right quality and quantity. In place of the rigs permanent oil platforms are built and anchored to the seabed to extract the oil. After being off –loaded from the separate storage tanks into largest tanks oil is sent ashore via pipelines.

You May Also Read: Water Resources in India

Study of the depth of the Ocean

Scientists and researchers all over the world use underwater craft like submersible submarines and bathyscaphes to study the depths of the ocean. They are specially designed to protect the people present inside from high underwater pressure. Scientists work in them for fairly long period without returning to the surface of the sea.

A submarine is a specialized watercraft that operates underwater; they can float at different levels in water because they are fitted with ballast tanks. When the submarine is required to dive, the tanks (the ballast tank) are filled with water that makes it heavy and it sinks. To get it to the surface, the water in the tanks is replaced with compressed air, due to which vessel floats to the surface proving the point that Air is lighter than Water. Navies of the most developed countries employ submarines which are also used for marine and freshwater research.

A submersible, almost a mini submarine, is used by divers to explore deep sea and searching for shipwrecks. Submersible are also used to study the marine life at the bottom of the sea-the seabed.