Can you imagine an illiterate taking class to trainee IAS officers? 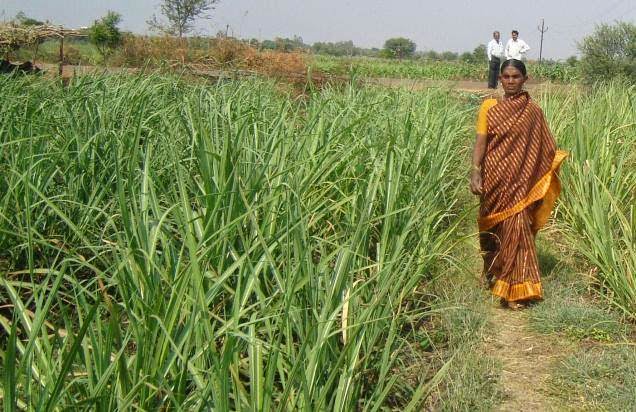 That’s what has been accomplished by Aaidala Lalitamma of Raipally village, about 50 kms from the district headquarters. But one may raise eyebrows at the thought until he/she converses with Lalitamma who more than willingly shares that she was the one to impart knowledge on non-pesticide management methods (NPM) to trainees.

Meet the 45-year-old Lalitamma who recently went to Lal Bahadur Sastri National Academy of Administration (LBSNAA) at Mussoori to take classes to the trainee IAS officers for one day.

Ms. Lalitamma is an active farmer who has been practicing NPM for the past five years in addition to following rain-fed harvesting system. She not only prepares her own seed and organic fertilisers and pesticides, but also sells it to others based on their requirement. She has been active in spreading NPM methods in the district and trains others in preparing required liquids and solids for their farms using cow dung, cow urine, neem leaves and other organic materials.

Her income grew after shifting to organic farming and she even has constructed a house. She had an income of Rs. 70,000 by growing leafy vegetables for three months.

“It’s a great experience to have an opportunity to teach NPM methods to the trainee collectors at their institute. I have explained to them on how I am into this, the advantages I am enjoying, the cost reduction in cultivation and being self-reliant in seed, fertiliser and pesticide requirements,” proud Lalitamma told The Hindu while sharing her Mussoori experiences. Did she fear to speak with them? “No. I felt as if I was speaking with my children and I was happy to share my knowledge with them,” she said, who has been cultivating 13 varieties of crops in her farm. She was taken in a flight from Hyderabad to New Delhi and then to Mussoori. Earlier, she had gone to Delhi to receive an award from the Union Government for her initiative in NPM practice.