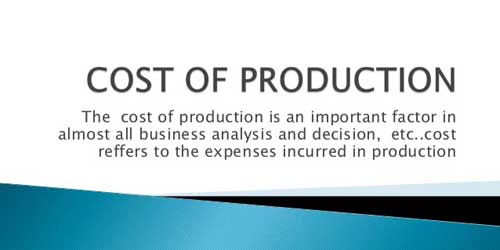 The short run is a period of time when there is at least one fixed factor input. This is usually the capital input such as plant and machinery and the stock of buildings and technology. In the short run, the output of a business expands when more variable factors of production (e.g. labour, raw materials and components) are employed.

Must Read: Balance of Trade

In the long run, all of the factors of production can change giving a business the opportunity to increase the scale of its operations. For example, a business may grow by adding extra labour and capital to the production process and introducing new technology into their operations.

The law of diminishing returns

The law of diminishing returns occurs because factors of production such as labour and capital inputs are not perfect substitutes for each other. This means that resources used in producing one type of product are not necessarily as efficient (or productive) when switched to the production of another good or service.

Costs are defined as those expenses faced by a business when producing a good or service for a market. Every business faces costs and these must be recouped from selling goods and services at different prices if a business is to make a profit from its activities. In the short run a firm will have fixed and variable cost of production. Total cost is made up of fixed costs and variable costs

These costs relate do not vary directly with the level of output. Examples of fixed costs include:

You May Also Read: The Goods and Services Tax (GST)

Variable costs vary directly with output. i.e. as production rises, a firm will face higher total variable costs because it needs to purchase extra resources to achieve an expansion of supply. Examples of variable costs for a business include the cost of production ie; raw materials, labour costs and other consumables and components used directly in the production process.

Marginal cost (MC) is defined as the change in total costs resulting from the production of one extra unit of output. In other words, it is the cost of expanding production by a very small amount.