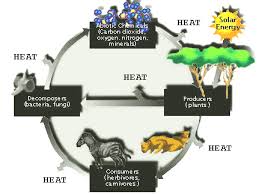 An ecosystem consists of the biological community that occurs in some locale, and the physical and chemical factors that make up its non-living or abiotic environment. There are many examples of ecosystems — a pond, a forest, an estuary, a grassland. The boundaries are not fixed in any objective way, although sometimes they seem obvious, as with the shoreline of a small pond. Usually, the boundaries of an ecosystem are chosen for practical reasons having to do with the goals of the particular study.

Components of an Ecosystem

The parts of an ecosystem can be listed under the headings “abiotic” and “biotic”.
Abiotic components:

By and large, this set of environmental factors is important almost everywhere, in all ecosystems. Usually, biological communities include the “functional groupings”. A functional group is a biological category composed of organisms that perform mostly the same kind of function in the system; for example, all the photosynthetic plants or primary producers form a functional group. Membership in the functional group does not depend very much on who the actual players (species) happen to be; only on what function they perform in the ecosystem.

The plants, zebra, lion, and so forth illustrates the two main ideas about how ecosystems function: ecosystems have energy flows and ecosystems cycle materials. These two processes are linked, but they are not quite the same

Energy enters the biological system as light energy, or photons, is transformed into chemical energy in organic molecules by cellular processes including photosynthesis and respiration, and ultimately is converted to heat energy. This energy is dissipated, meaning it is lost to the system as heat; once it is lost it cannot be recycled.  Without the continued input of solar energy, biological systems would quickly shut down. Thus, the earth is an open system with respect to energy.

Elements such as carbon, nitrogen, or phosphorus enter living organisms in a variety of ways. Plants obtain elements from the surrounding atmosphere, water, or soils. Animals may also obtain elements directly from the physical environment, but usually they obtain these mainly as a consequence of consuming other organisms. These materials are transformed biochemically within the bodies of organisms, but sooner or later, due to excretion or decomposition, they are returned to an inorganic state. Often bacteria complete this process, through the process called decomposition or mineralization

During decomposition these materials are not destroyed or lost, so the earth is a closed system with respect to elements (with the exception of a meteorite entering the system now and then). The elements are cycled endlessly between their biotic and abiotic states within ecosystems. Those elements whose supply tends to limit biological activity are called nutrients.

There are many food links and chains in an ecosystem, and all of these linkages can be referred as a food web. Food webs can be very complicated, where it appears that “everything is connected to everything else”, and it is important to understand what the most important linkages are in any particular food web.