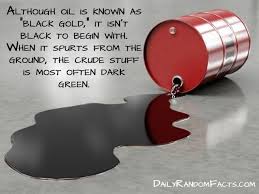 Oils are liquids that do not dissolve in water and burn easily. Oils are usually made from long chains of carbon and hydrogen atoms. Do you know facts about Oil that there are three main kinds of oil: essential, fixed and mineral oils. Essential oils are thin, perfumed oils from plants. They are used in flavouring and aromatherapy. Fixed oils are made by plants and animals from fatty acids. They include fish oils and nut and seed oils. Mineral oils come from petroleum formed underground over millions of years from the remains of micro-organisms.

The US Exempts India, 8 Others from Iran Oil Sanctions