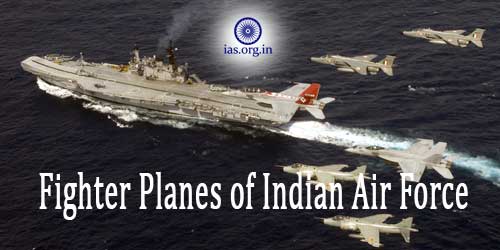 Indian Air Force has started upgrading its combat aircraft fleet since the last few years in order to enhance its operational capability and maintain fighter plane of Indian Air Force as modern weapon platforms, capable of meeting the present challenges posed by the security scenario in our region.

The Sukhoi Su-30MKI is a twinjet multirole air superiority fighter plane of Indian Air Force (IAF) designed by Russia’s Sukhoi Corporation beginning in 1995 and built under licence by India’s Hindustan Aeronautics Limited (HAL) IAF. Development of the variant started after India signed a deal with Russia in 2000 to manufacture 140 Su-30 fighter jets. The first Russian-made Su-30MKI variant was accepted into the Indian Air Force in 2002, while the first indigenously assembled Su-30MKI entered service with the IAF in 2004.

The Su-30MKI is a highly integrated twin-finned fighter plane of Indian Air Force. The aircraft is tailor-made for Indian specifications and integrates Indian systems and avionics as well as French and Israeli sub-systems.The airframe is constructed of titanium and high-strength aluminium alloys. The Su-30MKI is expected to form the backbone of the Indian Air Force’s fighter fleet to 2020 and beyond. The Sukhoi Su-30MKI is the most potent fighter plane of Indian Air Force in service in the late 2000s. The MKIs are often fielded by the IAF in bilateral and multilateral air exercises.

Su-30MKI is a two seat long range, multi role interceptor and uses an aerodynamic configuration. India Today reported that Russia had won a contract to upgrade 40 Su-30MKIs with new radars, onboard computers, electronic warfare systems and the ability to carry the BrahMos cruise missile. The Brahmos missiles integrated on the Su-30s will provide the capability to attack enemy formations from stand-off ranges of around 300 km.

The HAL Tejas is an Indian fighter plane of Indian Air Force with single-seat, single-jet engine, multi-role, lightweight, high-agility supersonic, tactical fighter aircraft. The aircraft’s design and development programme is being led by the Aeronautical Development Agency (ADA) of the Indian Department of Defence, with Hindustan Aeronautics Limited (HAL) as the prime industrial contractor.

Tejas is being developed as a single-seat fighter plane of Indian Air Force (IAF).The first Tejas squadron for the fighter plane of Indian Air Force is expected to be formed in July, 2016. Tejas has a pure double delta wing configuration with no tailplanes or canard, and a single dorsal fin. It integrates technologies such as relaxed static stability, fly-by-wire flight control system, multi-mode radar, integrated digital avionics system, composite material structures, and a flat rated engine. It is the smallest and lightest in its class of contemporary supersonic combat aircraft.

The HAL Tejas, fighter plane of Indian Air Force is fitted with the fly-by-wire (FBW), flight control system (FCS), multi-mode pulse-doppler radar, and afterburning turbofan engine. The aircraft can be armed with air-to-air, air-to-ground and anti-ship missiles, precision-guided munitions, rockets and bombs. Electronic warfare, targeting, surveillance, reconnaissance or training pods can be carried on the hardpoints. Drop tanks can also be carried.

The Mikoyan MiG-29 is a twin-engine jet fighter plane of Indian Air Force designed in the Soviet Union. Developed by the Mikoyan design bureau as an air superiority fighter during the 1970s, the MiG-29, along with the larger Sukhoi Su-27, was developed to counter new American fighters such as the McDonnell Douglas F-15 Eagle, and the General Dynamics F-16 Fighting Falcon. The MiG-29 entered service with the Soviet Air Force in 1982. The MiG-29 was first publicly seen in the West when the Soviet Union displayed the aircraft in Finland on 2 July 1986.

The MiG-29 has a mid-mounted swept wing with blended leading-edge root extensions (LERXs) swept at around 40°; there are swept tailplanes and two vertical fins, mounted on booms outboard of the engines. Automatic slats are mounted on the leading edges of the wings; they are four-segment on early models and five-segment on some later variants. On the trailing edge, there are maneuvering flaps and wingtip ailerons.

Read Also: The Deadliest Earthquakes of the World

The Dassault Mirage 2000 is a French multirole, single engine combat fighter from Dassault Aviation of France. It was designed in the late 1970s as a lightweight fighter based on the Mirage III for the French Air Force. It has been operational since 1984, and has been selected by Abu Dhabi, Egypt, Greece, India, Peru, Qatar, Taiwan and the United Arab Emirates. The Mirage 2000 evolved into a multirole fighter plane of Indian Air Force with several variants which include the Mirage 2000N and 2000D strike variants, the improved Mirage 2000-5 and several export variants.

Mirage 2000 has an upgraded digital weapon delivery and navigation system (WDNS). The Mirage 2000, fighter plane of Indian Air Force is fitted with a TV/CT CLDP laser designation pod from Thales Optronics, which provides the capability to fire laser-guided weapons by day and night. Mirage 2000 is equipped with an SNECMA M53-P2 turbofan engine, which provides 64kN thrust and 98kN with afterburn.

The Mikoyan-Gurevich MiG-21 is a supersonic jet fighter plane of Indian Air Force, designed by the Mikoyan-Gurevich Design Bureau in the Soviet Union. It was popularly nicknamed “Balalaika”, from the aircraft’s planform-view resemblance to the Russian stringed musical instrument by Polish pilots due to the shape of its fuselage.

The MiG-21 jet fighter plane of Indian Air Force was a continuation of Soviet jet fighters, starting with the subsonic MiG-15 and MiG-17, and the supersonic MiG-19. The MiG-21 was the first successful Soviet aircraft combining fighter and interceptor characteristics in a single aircraft. It was a lightweight fighter, achieving Mach 2 with a relatively low-powered afterburning turbojet.

Mikoyan-­Gurevich was formed in the relatively early stages of World War 2 by the Soviet government. The firm’s initial production offerings became the modestly­ successful MiG­1 and MiG­3 piston ­engined fighters that helped to stave off the German advance into Russia. By the end of World War 2, the firm had produced their first production jet ­powered aircraft in the MiG­9 “Fargo”.

Must Read: Top 10 Major Lakes of the World

The SEPECAT Jaguar is an Anglo-French jet fighter plane of Indian Air Force originally used by the British Royal Air Force and the French Air Force in the close air support and nuclear strike role, and still in service with the Indian Air Force.

Jaguar is a twin-engine, ground attack fighter plane of Indian Air Force designed and developed jointly by Breguet of France and the UK-based British Aircraft Corporation (BAC). The two companies formed a joint venture called SEPECAT to develop the aircraft.

Breguet and BAC joined in 1966 to develop the Jaguar. The fighter plane of Indian Air Force was initially developed as a jet trainer with light low level attack capability but later its missions were upgraded to include supersonic, reconnaissance and tactical nuclear strike roles. Construction of the Jaguar was equally shared between the two companies, with BAC developing the wings, intakes, rear fuselage and tail, and Dassault building the nose, centre fuselage and landing gear. Dassault became a partner in the project by acquiring Breguet in 1971. The maiden flight took place in September 1968 and the aircraft entered service with France in 1973.

The Jaguar has 23 variants. The Jaguar is powered by two Adour Mk 102 turbofan engines rated at 22.75kN of dry thrust each. The engine is designed and built jointly by Rolls-Royce of UK and Turbomeca of France in 1968. It is a two-shaft engine which generates 32.5kN of thrust after burner.

The Jaguar, fighter plane of Indian Air Force is of monoplane design with an aluminium airframe. The aircraft is equipped with an in-flight refuelling probe at the starboard side of the front fuselage to execute air refuelling missions even under the worst weather conditions. It is equipped with spoilers, air brakes, rudder, double slotted flaps, slats, critical systems and bulletproof windscreen.

The Jaguar, fighter plane of Indian Air Force can fly at a maximum speed of 1,699km/h. The combat radius and ferry range of the aircraft are 908km and 3,524km respectively. The service ceiling is 14,000m.

The Mikoyan MiG-27 is a variable-geometry ground-attack fighter plane of Indian Air Force, originally built by the Mikoyan design bureau in the Soviet Union and later license-produced in India by Hindustan Aeronautics as the Bahadur (“Valiant”). It is based on the Mikoyan-Gurevich MiG-23 fighter aircraft, but optimized for air-to-ground attack.

They are designed to carry heavy armament load to the tune of six tons and fly over long distances. Flown by a single pilot they have accurate navigation and weapon delivery systems.

Read Must: Most Polluted Cities in India

The Boeing C-17 Globemaster III is a large military transport aircraft. It was developed for the United States Air Force (USAF) from the 1980s to the early 1990s by McDonnell Douglas. The C-17 carries forward the name of two previous piston-engined military cargo aircraft, the Douglas C-74 Globemaster and the Douglas C-124 Globemaster II. The C-17 commonly performs strategic airlift missions, transporting troops and cargo throughout the world; additional roles include tactical airlift, medical evacuation and airdrop duties. It was designed to replace the Lockheed C-141 Starlifter, and also fulfill some of the duties of the Lockheed C-5 Galaxy, freeing the C-5 fleet for outsize cargo.

It has an international range and the ability to land on small airfields. A fully integrated electronic cockpit and advanced cargo system allows a crew of three (the pilot, co-pilot and loadmaster) to operate all systems on any type of mission.

A propulsive lift system allows the C-17 to achieve safe landings on short runways. The C-17 is capable of landing a full payload in less than 3,000ft. The propulsive lift system uses engine exhaust to generate lift.The engine exhaust is directed onto large flaps, which extend into the exhaust stream, allowing the aircraft to fly a steep approach at a relatively low landing speed.