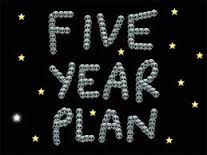 The Indian economy has been premised on the concept of planning. This has been carried through the Five-Year Plans, developed, executed, and monitored by the Planning Commission. With the Prime Minister as the ex-officio Chairman, the commission has a nominated Deputy Chairman, who holds the rank of a Cabinet Minister. Montek Singh Ahluwalia is the last Deputy Chairman of the Commission (resigned on 26 May 2014).

The Eleventh Plan completed its term in March 2012 and the Twelfth Plan is currently underway. Prior to the Fourth Plan, the allocation of state resources was based on schematic patterns rather than a transparent and objective mechanism, which led to the adoption of the Gadgil formula in 1969. Five-Year Plans (FYPs) are centralized and integrated national economic programs. Joseph Stalin implemented the first FYP in the Soviet Union in the late 1920s

At the end of the plan period in 1956, five Indian Institutes of Technology (IITs) were started as major technical institutions. The University Grant Commission (UGC) was set up to take care of funding and take measures to strengthen the higher education in the country.

The Second Plan, particularly in the development of the public sector. The plan followed the Mahalanobis model, an economic development model developed by the Indian statistician Prasanta Chandra Mahalanobis in 1953. The plan attempted to determine the optimal allocation of investment between productive sectors in order to maximise long-run economic growth. It used the prevalent state of art techniques of operations research and optimization as well as the novel applications of statistical models developed at the Indian Statistical Institute.

The Third Five-year Plan stressed agriculture and improvement in the production of wheat, but the brief Sino-Indian War of 1962 exposed weaknesses in the economy and shifted the focus towards the defence industry and the Indian Army. In 1965–1966, India fought a War with Pakistan. There was also a severe drought in 1965. The war led to inflation and the priority was shifted to price stabilisation. The construction of dams continued. Many cement  and fertilizer plants were also built. Punjab began producing an abundance of wheat. Many primary schools were started in rural areas.

At this time, Indira Gandhi was the Prime Minister. The Indira Gandhi government  nationalised 14 major Indian banks and the Green Revolution in India advanced agriculture. In addition, the situation in East Pakistan (now Bangladesh) was becoming dire as the Indo-Pakistan War of 1971 and Bangladesh Liberation War took funds earmarked for industrial development.

The Electricity Supply Act was amended in 1975, which enabled the central government to enter into power generation and transmission. The Indian national highway system was introduced and many roads were widened to accommodate the increasing traffic.

The Sixth Five-Year Plan marked the beginning of economic liberalisation. Price controls  were eliminated and ration shops were closed. This led to an increase in food prices and an increase in the cost of living. This was the end of Nehruvian socialism. Family planning was also expanded in order to prevent overpopulation.

The Seventh Five-Year Plan marked the comeback of the Congress Party to power. The plan laid stress on improving the productivity level of industries by the upgrading of technology.

The main objectives of the Seventh Five-Year Plan were to establish growth in areas of increasing economic productivity, production of food grains, and generating employment.

The Ninth Five-Year Plan focused on the relationship between the rapid economic growth and the quality of life for the people of the country. The prime focus of this plan was to increase growth in the country with an emphasis on social justice and equity.

The main objectives of the Tenth Five-Year Plan were: Attain 8% GDP growth per year, Reduction of poverty rate by 5% by 2007, Providing gainful and high-quality employment at least to the addition to the labour force, Reduction in gender gaps in literacy and wage rates by at least 50% by 2007, 20-point program was introduced, Target growth: 8.1% – growth achieved: 7.7%, Expenditure of ₨ 43,825 crores for tenth five years

The main objectives of the Eleventh Five- Year Plan were: Rapid and inclusive growth.(Poverty reduction), Emphasis on social sector and delivery of service therein, Empowerment through education and skill development, Reduction of gender inequality, Environmental sustainability, To increase the growth rate in agriculture,industry and services to 4%,10% and 9% respectively, Reduce Total Fertility Rate to 2.1, Provide clean drinking water for all by 2009.

The Twelfth Five-Year Plan of the Government of India has decided for the growth rate at 8.2% but the National Development Council (NDC) on 27 Dec 2012 approved 8% growth rate for 12th five-year plan. The Deputy Chairman of the Planning Commission Mr. Montek Singh Ahluwalia has said that achieving an average growth rate of 9 percent in the next five years is not possible. The Final growth target has been set at 8% by the endorsement of the plan at the National Development Council meeting held in New Delhi.

After in the middle of 12th five year plan, government dissolved the Planning Commission and formed NITI Ayog in its place. This action was in demand as Planning commission had lost its relevance in fast changing global scenario.