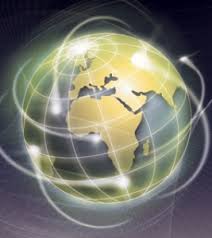 Globalisation describes a process by which national and regional economies, societies, and cultures have become integrated through the global network of trade, communication, immigration, and transportation.

Globalisation is the process by which the world is becoming increasingly interconnected as a result of massively increased trade and cultural exchange. Globalisation has increased the production of goods and services. The biggest companies are no longer national firms but multinational corporations with subsidiaries in many countries.

Globalization implies the opening of local and nationalistic perspectives to a broader outlook of an interconnected and interdependent world with free transfer of capital, goods, and services across national frontiers.

The International Monetary Fund (IMF) identified four basic aspects of globalization: trade and transactions, capital and investment movements, migration and movement of people, and the dissemination of knowledge.

Environmental challenges such as climate change, cross-boundary water, and air pollution, and over-fishing of the ocean are linked with globalization. Globalizing processes affect and are affected by business and work organization, economics, socio-cultural resources, and the natural environment.

Globalisation has resulted in:

International trade is the exchange of capital, goods, and services across international borders or territories. In most countries, such trade represents a significant share of gross domestic product (GDP). Industrialization, advanced transportation, multinational corporations, offshoring and outsourcing all have a major impact on world trade. The growth of international trade is a fundamental component of globalization.

Economic globalization is the increasing economic interdependence of national economies across the world through a rapid increase in cross-border movement of goods, service, technology and capital.