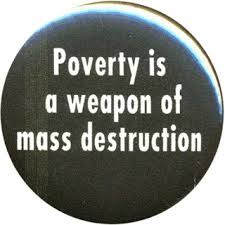 Poverty is hard to define, even though it is a term that we use very often. A minimum income level used as an official standard for determining the proportion of a population living in poverty. Poverty lines vary in time and place, and each country uses lines which are appropriate to its level of development, societal norms, and values.

According to the definition by Planning Commission of India, the poverty line is drawn with an intake of 2400 calories in rural areas and 2100 calories in urban areas. If a person is unable to get that much minimum level of calories, then he/she is considered as being below the poverty line.

“Indicators of Poverty & Hunger”, absolute poverty as the absence of any two of the following eight basic needs:

The term “Absolute Poverty”, is however slightly misleading when defined in this manner, as there are great numbers of people who have none of these eight basic needs met, yet these are still lumped with those who have four or five or even six of these basic needs met.

The basic needs approach is one of the major approaches to the measurement of absolute poverty in developing countries. It attempts to define the absolute minimum resources necessary for long-term physical well-being, usually in terms of consumption goods. The poverty line is then defined as the amount of income required to satisfy those needs. The ‘basic needs’ approach was introduced by the International Labour Organization’s World Employment Conference in 1976.

“Perhaps the high point of the WEP was the World Employment Conference of 1976, which proposed the satisfaction of basic human needs as the overriding objective of national and international development policy. The basic needs approach to development was endorsed by governments and workers’ and employers’ organizations from all over the world. It influenced the programmes and policies of major multilateral and bilateral development agencies, and was the precursor to the human development approach.”

Causes of Poverty in India

The Government has introduced a number of antipoverty programs since independence to alleviate poverty. These include various employment guarantee programmes such as National Rural Employment Programme, Rural Landless Employment Guarantee Programme etc. Recently, Government has initiated National Rural Employment Guarantee Program (NREGP). As per NREGP, the government will provide 100 days of employment per year to whosoever is willing to work. NREGP is considered as a landmark program in poverty alleviation measures.

One of the major problems with poverty alleviation programs is their implementation. Rajiv Gandhi once said that out of 100 paisas allocated for poor only 14 paisa reaches them. But in spite of their weaknesses, poverty alleviated program can be credited for their success in alleviating poverty to an extent. Greater public-private partnership and committed and efficient bureaucratic machinery are required to tackle poverty.

Poverty: The bane of Modern India