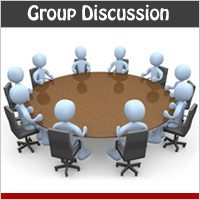 INTRODUCTION
Among the battery of personality tests, the Group Discussion Test is the most important and popular one. This technique at once enables the examiner to assess the leadership levels and personality characteristics of all the candidates constituting the group and undergoing the Group Discussion Test at one and the same time. Thus, as matiy as 12 candidates can be evaluated and assessed simultaneously in about 20 to 25 minutes. In no other personality field- test, so many individuals can be reliably tested within this short span of time. It is obvious that if these candidates were to be individually interviewed or otherwise tested for die same purpose, it may easily take six to eight hours.
Secondly, the candidates are tested when they are busy in action and when they expose their natural personality traits with utmost spontaneity. The nature of the test is such that no candidate can put on a mask for any length of time during the test. Above all, the Group Discussion Test also enables the examiner to compare each candidate with the rest in the group, besides obtaining the matrix references of the participants. Thus, the individual’s assessment of the examiner can be cross-checked with the preferences of the candidates themselves.
RATIONALE”
Maximum advantage from this test can be derived when the same is applied as a leaderless group task. No one will be designated or appointed officially as the leader, chairman, speaker or president for the Group Discussion exercise. The examiner will announce the subject, briefly explain the guidelines or rules and thereafter retire from the scene. He will not in anyway participate, intervene or interfere with the deliberations of the group when it is engaged in the task of carrying out the discussion.
As we all know, it is not possible for any group or team consisting of two or more people to accomplish a common task or goal without the help of a leader or a coordinator. In the absence of an appointed leader, those in the group with natural leadership abilities will automatically come forward to fill the vacuum. There could be competition and rivalries among those who wish to assert themselves as leaders. The successful leader will be able to overcome all obstacles and opposition and help the group complete the discussion within the given time frame.
PRESENTATION ~
We are presenting to our readers the tape recorded version of a ‘live’ Group Discussion conducted at CSR Careers & Courses wing. The expert comments of the examiners have been incorporated at the right places to enable correct appreciation of the proceedings, operation and evaluation. This group consists of eight candidates of similar age level, educational qualifications and background experience. The exercise being a friendly and informal exchange of views, every candidate has the freedom to say what he feels Mke, as and when he does. The group has full liberty to form any additional rules if it so desires.
The time allowed for the discussion is 25 minutes. To facilitate easy recognition and identification, the candidates have been requested to address or refer to one another by die roll or chest number allotted to each candidate. After announcing the subject and launching the group on its task, the examiner has retired from the scene and the group is left to proceed with the discussion on its own.
_     PROGRESS
In the presence of the examiner, die candidates are a bit tense and maintain total silence. But once he retires from the scene, the candidates feel somewhat relaxed. The silence is broken and replaced by low whispers, asides, cross­talks and murmured conversations among the group members. However, before the whispers and asides could gain any momentum, No. 4 intervenes in a hurry.
No. 4 : Hello folks, I mean you all. I want to request, what I mean is that T would like to say something. You see the time is very short. We must start the discussion widiout any waste of time. We must start with No. 1. Now No. 1, please come on, you speak. After you No. 1, it will be the turn of No. 2, No. 3 and so on. Now please start No. 1.
No. 2 : Hold on, hold on No. 4, what are you saying? I cannot make head or tail ot whatever you are proposing. My first problem is the subject itself which I think is quite confusing. In my view there is some catch somewhere in it. It is better we look at it a littie more closely.
No. 4 : (Seems somewhat taken aback and upset. He also looks rather confused) Catch! What do you mean by catch? Anyway, let us not worry now and waste time about catches. When we discuss the subject we may find out your catch, if any. In the meantime, I suggest that each of us speak for two minutes in the second round also.
No. 2 : I say No. 4, what is wrong with you? Why don’t you listen to what I say ? I told you that I don’t understand the subject. I mean it has some hidden implications. How can one talk without knowing the subject and understanding its meaning?
No. 6 : (Intervening at this stage) It looks as if No. 4 has some ideas after reading the model Group Discussion Tests and he might also have undergone some coaching. Therefore, now he is attempting to establish himself as the leader. What do you say, No. 7?
No. 7 : (Does not answer but maintains a stoic silence.)
No. 4 : Okay, okay, No. 6, I heard you. So what? I only made a request to you all. What is wrong with that?
No. 2 : Every damn thing is wrong. I told you there is some catch somewhere. The subject sounds funny. Unless we know the secret, we all will fail.
No. 4 : (He is totally taken aback by this direct attack from No. 2. He does not know how to proceed further. At this stage, No. 5 takes over.)

No. 5 : No. 2, I take it that you feel that the subject, as given to us has some hidden meaning and that we should not accept it on its face value. Do I understand you correctly?