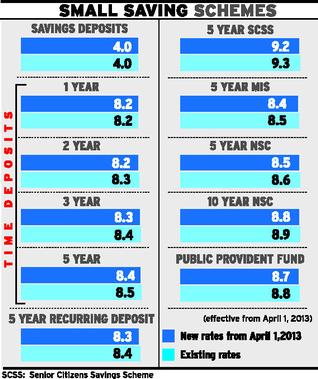 The Central Government has announced that starting April 1, 2013, Public Provident Fund (PPF) accounts and small savings schemes will fetch reduced returns owing to a cut in interest rates by 10 basis points each. According to a Finance Ministry statement, the interest rate on PPF will stand reduced from 8.8 percent to 8.7 percent. Likewise, the five-year maturity Monthly Income Scheme (MIS) will earn an interest of 8.4 percent during the 2013-14 financial year.

The only exception has been made in the case of savings deposits schemes and fixed deposits of up to one year run by post offices with their interest rates kept unchanged at 4 percent and 8.2 percent, respectively All other savings schemes falling under the National Small Savings Fund (NSSF) will see a reduction in interest rates by 10 basis points which would be applicable for the entire 2013-14 financial year. For instance, the National Savings Certificates (NSC) having five and 1,0-year maturity periods will now earn interest rates of 8.5 percent and 8.8 percent, respectively, as against 8.6 percent and 8.9 percent hitherto. The interest rate for Senior Citizens Savings Scheme (SCSS) also stands reduced to 9.2 percent from 9.3 percent.