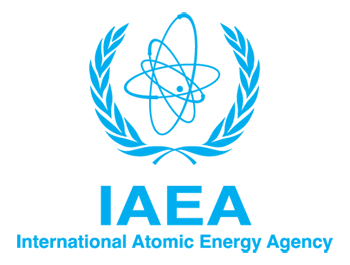 The International Atomic Energy Agency (IAEA) is an international organisation that seeks to promote the peaceful use of nuclear energy and to inhibit its use for any military purpose, including nuclear weapons.
The IAEA was established as an autonomous organisation on July 29,
1957. Though established indepen¬dently of the United Nations through T,le IAEA Emblem its own international treaty, the IAEA Statute, the IAEA reports to both the UN General Assembly and Security Council. The IAEA has its headquarters in Vienna, Austria. The IAEA has two ‘Regional Safeguards Offices’ which are located in Toronto, Canada and in Tokyo, Japan. The IAEA also has two liaison offices which are located in New York City. United the States and in Geneva, Switzerland. In addition, the IAEA has three laboratories located in Vienna and Seibersdorf, Austria, and in Monaco. The IAEA serves as an intergovernmental forum for scientific and technical cooperation in the peaceful use of nuclear technology and nuclear power worldwide. The programmes of the IAEA encourage the development of the peaceful applications of nuclear technology, provide international safeguards against misuse of nuclear tech¬nology and nuclear materials and promote nuclear safety (including radiation protection) and nuclear security standards and their implementation the IAEA and its former Director-General.

In 1953, the President of the United States, Dwight D. Eisenhower, proposed the creation of an international body to both regulate and promote the peaceful use of atomic power (nuclear power), in his Atoms for Peace address to the UN General Assembly. In September 1954, the United States proposed to the General Assembly the creation of an international agency to take control of fissile material, which .a^aftTbe used either for nuclear power or for nuclear weapons. This agency would establish a kind of ‘nuclear bank’.
The United States also called for an international scientific conference on all of the peaceful aspects of nuclear power. By November 1954, it had become clear that the Soviet Union would reject any international custody of fissile material, but that a clearing house for nuclear transactions might be possible. From August 8 to August 20, 1955, the United Nations held the International Conference on the Peaceful Uses of Atomic Energy in Geneva, Switzerland. During 1956, an IAEA Statute Conference was held to draft the founding documents for the IAEA, and the IAEA Statute was completed at a conference in 1957. Former US Congressman W. Sterling Cole served as the IAEA’s first Director-General from 1957 to 1961. Mr. Cole served only one term, after which the IAEA was headed by two Swedes for nearly four decades : the scientist Sigvard Eklund held the job from 1961 to 1981, followed by former Swedish Foreign Minister Hans Blix, who served from 1981 to 1997. Mr. Blix was succeeded as Director-General by Mohamed El Baradei of Egypt, who served until November 2009.
Beginning in 1986, in response to the nuclear reactor explosion and disaster near Chernobyl, Ukraine, the IAEA redoubled its efforts in the field of nuclear safety, the same happened after the Fukushima disaster in Fukushima,
Japan. Both the IAEA and its then Director-General, Mr. El Baradei, were awarded the Nobel Peace Prize in 2005. In ElBaradei’s accep¬tance speech in Stockholm, he stated that only one percent of the money spent on developing new Yukiya Amano : weapons would be enough to feed T^e Director-General the entire world, and that, if we of the IAEA hope to escape self-destruction, then nuclear weapons should have no place in our collective conscience and no role in our security. On July 2, 2009, Mr. Yukiya Amano of Japan was elected as the Director-General for the IAEA defeating Abdul Samad Minty of South Africa and Luis E. Echavarri of Spain. On July 3, 2009, the Board of Governors voted to appoint Yukiya Amano ‘by acclamation’ and IAEA General Conference in September 2009 approved. He took office on December 1, 2009.
Must Read: The International Fund for Agricultural Development (IFAD)

The IAEA’s mission is guided by the interests and needs of the Member States, strategic plans and the vision embodied in the IAEA Statute (see below). Three main pillars—or areas of work—underpin the IAEA’s mission : Safety and Security; Science and Technology and Safe¬guards and Verification. The IAEA as an autonomous organisation is not under direct control of the UN, but the IAEA does report to both the UN General Assembly and Security Council. Unlike most other specialized inter¬national agencies, the IAEA does much of its work with the Security Council, and not with the United Nations Economic and Social Council. The structure and functions of the IAEA are defined by its founding document,
the IAEA Statute (see below). The IAEA has three main bodies : the Board of Governors, the General Conference, and the Secretariat. The IAEA exists to pursue the ‘safe, secure and peaceful uses of nuclear sciences and tech¬nology’ (Pillars 2005). The IAEA executes this mission with three main functions : the inspection of existing nuclear facilities to ensure their peaceful use, providing information and developing standards to ensure the safety and security of nuclear facilities, and as a hub for the various fields of science involved in the peaceful applications of nuclear technology. In 2004, the IAEA developed a Programme of Action for Cancer Therapy (PACT). PACT responds to the needs of developing countries to establish, to improve, or to expand radio¬therapy treatment programmes. The IAEA is raising money to help efforts by its Member States to save lives and to reduce the suffering of cancer victims.
The IAEA has established programmes to help developing countries in planning to build systematically the capability to manage the nuclear power programmes, including the Integrated Nuclear Infrastructure Group, which has carried out Integrated Nuclear Infrastructure Review missions in Indonesia, Jordan, Thailand and Vietnam. The IAEA reports that roughly 60 countries are considering how to include nuclear power in their energy plans. To enhance the sharing of information and experience among the IAEA Member States concerning the seismic safety of nuclear facilities, in 2008 the IAEA established the International Seismic Safety Center. This center is establishing safety standards and providing for their application in relation to site selection, site evaluation and seismic design.
Don’t Miss: INTERNATIONAL ATOMIC ENERGY AGENCY (IAEA)

The Board of Governors is one of two policy making bodies of the IAEA. The Board consists of 22 member states elected by the General Conference and at least 10 member states nominated by the outgoing Board. The outgoing Board designates the ten members who are the most advanced in atomic energy technology, plus the most advanced members from any of the following areas that are not represented by the first ten : North America, Latin America, Western Europe, Eastern Europe, Africa, Middle East and South Asia, South East Asia, the Pacific and the Far East. These members are designated for one year terms. The General Conference elects 22 members from the remaining nations to two-year terms. Eleven are elected each year. The 22 elected members must also represent a stipulated geographic diversity. The 35 Board members for the period 2012-13 are : Algeria, Argentina, Australia, Belgium, Brazil, Bulgaria, Canada, China, Costa Rica, Cuba, Egypt, France, Germany, Greece, Hungary, India, Indonesia, Italy, Japan, the Republic of Korea, Libya, Mexico, Nigeria, Norway, Pakistan, Poland the Russian Federation, Saudi Arabia, South Africa, Sweden, Thailand, the United Kingdom, Tanzania, the United States of America and Uruguay.
The Board, in its five yearly meetings, is responsible for making most of the policy of the IAEA. The Board makes recommendations to the General Conference on IAEA activities and budget, is responsible for publishing IAEA standards and appoints the Director-General subject to General Conference approval. Board members each receive one vote. Budget matters require a two-thirds majority. All other matters require only a simple majority. The simple majority also has the power to stipulate issues that will thereafter require a two-thirds majority. Two- thirds of all Board members must be present to call a vote. The Board elects its own Chairman.
Also, Read: Signing NPT not a prerequisite for Nuclear Suppliers Group

The IAEA is generally described as having three main missions :
• Peaceful uses : Promoting the peaceful uses of
nuclear energy by its member states.
• Safeguards : Implementing safeguards to verify that
nuclear energy is not used for military purposes, and
• Nuclear safety : Promoting high standards for
nuclear safety.
Peaceful Uses
According to Article II of the IAEA Statute, the objective of the IAEA is “to accelerate and enlarge the contribution of atomic energy to peace, health and prosperity throughout the world.” Its primary functions in this area, according to Article III, are to encourage research and development, to secure or provide materials, services, equipment and facilities for the Member States, to foster the exchange of scientific and technical information and training.
Three of the IAEA’s six Departments are principally charged with promoting the peaceful uses of nuclear energy. The Department of Nuclear Energy focuses on providing advice and services to the Member States on nuclear power and the nuclear fuel cycle. The Depart¬ment of Nuclear Sciences and Applications focuses on the
use of non-power nuclear and isotope techniques to help the IAEA Member States in the areas of water, energy, health, biodiversity, and agriculture. The Department of Technical Cooperation provides direct assistance to the IAEA Member States, through national, regional and inter-regional projects through training expert missions, scientific exchanges and provision of equipment.
Safeguards
Article II of the IAEA Statute defines the Agency’s twin objectives as promoting peaceful uses of atomic energy and “ensuring, so far as it is able, that assistance provided by it or at its request or under its supervision or control is not used in such a way as to further any military purpose.” To do this, the IAEA is authorized in Article III. A 5 of the Statute “to establish and administer safeguards designed to ensure that special fissionable and other materials, services, equipment, facilities and information made available by the Agency or at its request or under its supervision or control are not used in such a way as to further any military purpose; and to apply safeguards, at the request of the parties, to any bilateral or multilateral arrangement, or at the request of a State, to any of that State’s activities in the field of atomic energy.” The Department of Safeguards is responsible for carrying out this mission, through technical measures designed to verify the correctness and completeness of states’ nuclear declarations. *
Nuclear Safety
The IAEA classifies safety as one of its top three priorities, yet is spending only 8-9 percent of its 352 million-euro ($ 469 million) regular budget in 2011 on making plants
Have a look at:
Nuclear Security Summit (NSS)
Interesting facts about Atomic Bomb