My account
Get into your account.
LoginRegister
Plans
Home Learn Economy The General Agreement of Tariffs and Trade (GATT) 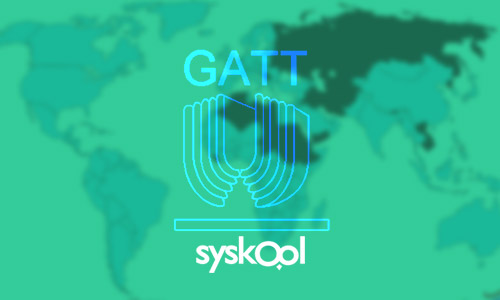 The world economy was badly shattered during World War II. After the war, the reconstruction of the world economy and restoration of trade become a paramount global concern. GATT was founded to alleviate the problems of many import restrictions instituted during the great depression of the 1930s which continued to be the major stumbling block in promoting trade.

Negotiated in 1947, GATT went into effect in January 1948. The Twenty-three countries that originally signed it were engaged at the time in drawing up the charter for a proposed International Trade Organisation (ITO), which would have been a United Nations special agency. Based largely on select parts of the draft ITO charter, GATT was concluded quickly in order to speed trade liberalization. Later, plans for ITO were abandoned and GATT becomes the only international instrument of trade rules accepted by the world’s major trade nations.

Today GATT is a multilateral treaty, subscribed to by ninety governments, which together account for more than four-fifths of world Trade. GATT’s rules govern the trade of its member countries and the conduct of their trade relations with one another. It embodies the contractual rights and obligations which have been accepted voluntarily in the mutual interest of its member countries. An important and continuing part of GATT’s activities is seeing the application of these rules.

It is also a means whereby countries negotiate the work together for the reduction of trade barriers in pursuit of the constant and fundamental aim of further liberalization of world trade. Obstacles to trade have been progressively reduced in successive multilateral negotiations through GATT.

GATT’s activities have evolved in response to major changes in the world economic scene; such as shifts in the relative economic strength of important countries or groups of countries; the emergence of the developing Third World as a major factor in international affairs; the trend toward regional or preferential economic groups; new monetary and payments difficulties; and the growing participation of Eastern European countries in GATT. GATT is a forum where such developments can be discussed and disputes resolved so that their undesirable effects can be countered through continuing efforts toward further liberalization of world trade.

GATT succeeded in promoting and securing the liberalization of much of world trade over 47 years. Continual reductions in industrial tariffs for an average of 40 per cent alone helped spur very high rates of world trade growth – around 8 per cent a year on average – during the 1950s and 1960s.

The momentum of trade liberalization ensured that trade growth consistently outpaced production growth throughout the GATT era. The multilateral trading system, as then represented by GATT, was recognized as an anchor for development and an instrument of economic and trade reform.

A whole corpus of jurisprudence on trade matters evolved under the aegis of GATT. The WTO is built on the strong foundation provided by the GATT.