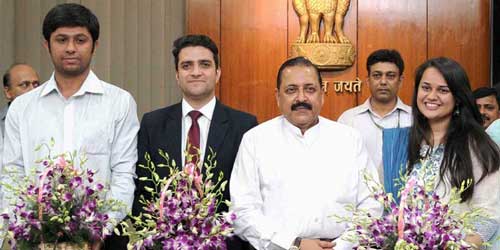 Delhi based Jasmeet Singh Sandhu, an Indian Revenue Service officer, has secured third position in the Civil Services Examintion, 2o15 by his consistent hardwork. Jasmeet was selected in 2014 Civil Services Exam and had got Indian Revenue Service (Customs and Central Excise) and is working as working as assistant commissioner. He is undergoing training at National Academy of Customs, Excise and Narcotics in Faridabad.

Jasmeet Singh Sandhu in interview said that “it feels incredible. I still can’t believe that I have get 3rd rank in UPSC exam. I am very excited and waiting for a new learning experience. My success mantra is hardwork is the key to success. IAS was always my first option.”

Tina Dabi of 22 years from New Delhi has topped the prestigious Civil Services Exams 2015, conducted by the Union Public Service Commission and has shown the growing clout of woman in the Indian Civil Services.

Athar Aamir-ul-Shafi Khan, a 23 year old boy has earned second rank in the Civil Services Exam and has made the militancy-torn Jammu and Kashmir proud by earning the envious rank in the UPSC Exams.

He thanked his parents and teachers for his success. “It is all because of my family, friends and Mukul Pathak sir (who runs a coaching class) that I could secure third rank in the exam,” Jasmeet Singh Sandhu said.

Jasmeet Singh Sandhu opted Psychology as his optional paper for the Mains Examination.  He took coaching only for a month and prepared for Civil Services Exams on his own. He attributes his success to consistent hardwork.

Bagging the third rank in the prestigious Civil Services Exam is another Delhite Jasmeet Singh Sandhu. This was Jasmeet’s fourth attempt as he was not able to clear it in his first two attempts, and got into the IRS on his third attempt and is working as an Assistant Commissioner in the Indian Revenue Services.

Jasmeet Singh Sandhu started preparing for Civil Services in 2010 but could not clear Civil Services Exam in the first two attempts and got into IRS in his 3rd attempt. He didn’t have any fixed routine for study but when he studied he grasped all properly. Jasmeet Singh Sandhu only took coaching for a month. “He prepared for the UPSC Exam on his own,” said the proud mother.