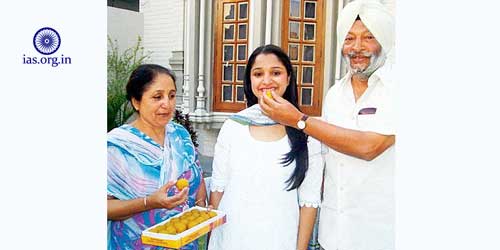 In states Punjab and Haryana, that have been in the news for discriminating against the girl child and having the worst sex ratios in the country, the two women have done proud by topping the civil services examination and bagging the first and second positions. The first position in the civil services exam has gone to Shena Aggarwal of Yamuna Nagar in Haryana. And Rukmani Riar had secured the second rank in Civil Services Exam of 2011.

Must Read: Smita Sabharwal IAS Topper from Hyderabad – A Role Model for Youth

Rukmani Riar was born and brought up in Chandigarh. Her father Baljinder Singh Riar is a lawyer in Hoshiarpur, Punjab. Her mother Takdeer Kaur is a housemaker. She is the only child of her parents.

Rukmani Riar said, “My hard work has paid off and I am very happy. I credit my parents, teachers, friends, and above all God for the success”.

Rukmani Riar did her schooling from Sacred Heart School at Dalhousie, Himachal Pradesh. After that she did her class 12 from Shivalik Public School, Mohali. Rukmani Riar completed her graduation in social sciences from Guru Nanak Dev University, Amritsar in 2008. She also holds a master degree in social entrepreneurship from the Tata Institute of Social Sciences (TISS) in Mumbai, 2010. Rukhmani Riar also received Gold Medals in her Post Graduation for securing the first position all three years in the University.

Rukmani Riar has interned with the Planning Commission of India and NGOs in Karnataka and Maharashtra for researching and understanding various social policies and finding ways to help them make a positive impact upon society.

Rukmai Riar opted for Political Science and Sociology as her optional subjects.

“Ever since I failed in Class 6, I am scared of failure. It was very depressing. But after that incident, I made up my mind that I won’t sulk and complain. I will work hard and give things my best. I believe that if one decides to persevere and come out of that phase, nothing can stop you achieving success,” says Rukmani Riar, UPSC all-India second topper of the 2011 batch.

Rukmani Riar did not opt for any coaching and cleared the Civil Services Exam in her very first attempt.

Rukmani Riar says, “I think my consistency, hard work, determination, persistence and consistency were basis of my preparation and the key to success. Specific reading, emphasis on every topics as well as subtopic and repeated revisions was my strategy”.

Rukmani Riar recommended NCERT books from 6th to 12th. She read the newspapers exhaustively for the interview and attended mock sessions to make her self more confident and reduce her follies. She revised the notes made from the newspaper at least 2-3 times before the Prelims and read editorials once before the Mains. She read each topic along with the articles which makes the preparation more through. Rukmani Riar also solved previous year question papers and also practiced expected questions to give herself a fair idea about the level of preparation.

Revision is the key to score well in GS. Rukmani Riar made a consistent effort to revise conventional GS at least 4 times before the Mains, and also go back to newspaper notes and magazines (marked portions). When it comes to attempting the GS mains two things were important one, she sticked to the word limit and second, attempt all the questions that she was sure of. She scored 250 plus in both the papers.

Work hard and the Sky is the limit. If I could do it, each of you can just do as well and and nothing can stop.