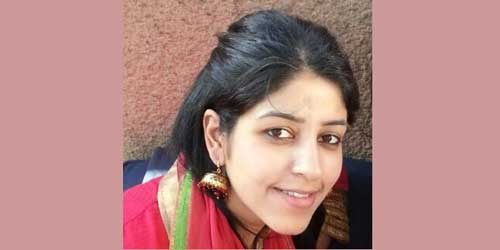 Sheema Nabi Qasba, a lawyer with a leading private firm in New Delhi from Kashmir has secured All India Rank 205th in Civil Services Examination conducted by Union Public Service Commission. Sheema’s first attraction towards the Civil Services was the IPS from a very young age and she chose it as her top preferences. If luck favours her, Sheema Nabi Qasba would like to get to take IPS.

As a child, Sheema Nabi Qasba was inspired by India’s first woman IPS officer Kiran Bedi and over the last many years Sheema nurtured the ambition. It was a tough drill managing a job and preparing for the top exams. Even as Sheema Nabi Qasba prepared for the exam, she worked on law-related projects as well.

“I felt very happy and great full to Allah that Sheema has been all through a hardworking daughter and very sincere in studies. I am happy that she has done well. I think it’s a very good beginning and I hope more and more people from Kashmir make it to Civil Services and I feel very happy that many youngsters from Kashmir are now joining Civil Services,” said GN Qasba, a proud father of Sheema Nabi Qasba.

Civil Services Examination which is conducted by Union Public Service Commission is considered to be the toughest exams to crack. “In Kashmir it is a good career option that’s open to everyone as long they are willing to work hard for it. It’s one of the fairest exams in the country and it is open to everyone, for aspirational people who want to do good in life,” said Sheema Nabi Qasba.

Sheema Nabi Qasba has completed her primary schooling from Presentation Convent School and later went for higher secondary school from Mallinson School Srinagar. After completing her schooling she completed her LL.B. (Honours) from National Law University, Jodhpur. Sheema also worked with a leading law firm in New Delhi for the last three years before qualifying for the UPSC Exam. It was a proud moment for Presentation Convent Higher Secondary School, Srinagar when Sheema Nabi Qasba, an ex-student, cleared the prestigious Civil Services Examination.

Addressing the students, Sheema Nabi Qasba said that “one needs to crack any examination is hard work.” She reiterated the importance of staying focused to achieve one’s goals in life. “Making a mention of the values like discipline, punctuality and humility, which her Presentation schooling has given her, she said that these have stood her in good stead and contributed to her success,” the statement added.

Sheema Nabi Qasba opted for  Sociology as her optional subject but for the exam the study level was an advanced one. A constant study of five hours a day helped Sheema to crack the hard nut. Sheema Nabi Qasba overcame the feeling of tiredness and stress by motivation. Sheema Nabi Qasba would love to join Indian Police Services but she won’t mind to serve in any other service either. Sheema was a sheltered child since her childhood and the ongoing conflict had no affect on her life.

This was Sheema Nabi Qasba’s second successful attempt. Earlier Sheema appeared in IAS exams in 2014 but she couldn’t crack it. “I am really relieved after cracking the exams. It is a moment of great happiness for me,” Sheema Nabi Qasba said.

Hard work, motivation and faith in her abilities were the mantras for Sheema Nabi Qasba success. Although Sheema Nabi Qasba was determined to qualify the exam when she was in school, but finally she took the call in 2014, three years after she finished her studies. The same year, she made my first attempt but did not succeed. However it was a good learning experience. Sheema Nabi Qasba cultivated from that experience brick by brick until she succeeded.

Sheema Nabi Qasba left for Delhi to study law after she finished her schooling in the Kashmir Valley. Later she picked a job as a lawyer. For Prelims, Sheema Nabi Qasba made a self study and for the Mains she opted for coaching classes. Sheema Nabi Qasba was working also during her preparations but sometimes she took off as well.

Sheema Nabi Qasba says, “Every year just a few hundred out of lakhs of aspirants manage to clear the Civil Services exam. It takes several months, sometimes years to clear the exams. But the toughest exams also bring out the best from the aspirants, many of those who struggle a lot, swim against the tide and overcome a lot of barriers to achieve their dreams.”

When it comes to success stories of young Kashmiri women, they are just a few. But as and when they happen, they set a benchmark and such aspirational shifts among the valley youngsters becomes an inspiration for several others aspirants too. Young boys and girls, born and brought up during turmoil, are now writing a new chapter of aspirational Kashmir by cracking Civil Services Exams. This year, 10 candidates from the Valley have cleared the Civils.

This year’s second topper in the Civil Services list is also from Kashmir – 23-year-old Akhtar Amir Khan, the son of a school teacher from Anantnag district in south Kashmir, a region that has seen the revival of terrorism in the last year. Akhtar Amir Khan and many other young Kashmiris have been inspired by Shah Faesal, the 2009 IAS topper from the state.