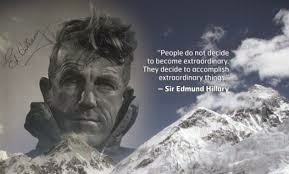 Sir Edmund Hillary (1919 – 2008) was an explorer and mountain climber. Together with Sherpa Tenzing Norgay, he was the first to climb to the summit of Mount Everest, the tallest mountain in the world. Edmund Hillary was born in Auckland, New Zealand on July 20, 1919. He became interested in climbing when he was 16 years old and climbed his first major mountain when he was 20. He continued his love for exploring and climbing mountains in the coming years, scaling many mountains.

In 1953 the British had received approval to make an attempt at scaling Mount Everest. The government of Nepal would only allow one expedition a year, so this was a big deal. The leader of the expedition, John Hunt, asked Hillary to join in the climb.

When climbing a mountain as high as Mount Everest, a large group of people are needed. There were over 400 members of the expedition. They climbed the mountain in stages, moving to a higher camp every few weeks and then getting acclimated to the high altitude. At each stage fewer and fewer people would continue to climb. Once they got to the final camp, there were two teams chosen to climb the last stage to the summit. One team was Edmund Hillary and Tenzing Norgay. The other team was Tom Bourdillon and Charles Evans. The team of Bourdillon and Evans tried first, but they failed to make it to the top. They got within 300 feet but had to turn back.

Finally, on May 28, 1953, Sir Edmund Hillary and Tenzing got their chance to try for the summit. They ran into some difficulties, including a 40-foot rock wall that is today called ‘Hillary’s Step’, but they made it to the top. They were the first to climb to the top of the world! Because the air was so thin, they only stayed at the top for a few minutes before returning to tell the world of their achievement.

Although Sir Edmund Hillary is mostly famous for being the first to the top of Mount Everest, he continued to climb other mountains and to be a world explorer. He climbed many other peaks in the Himalayas over the next several years.

In 1958 Sir Edmund Hillary took an expedition to the South Pole. His group was the third to ever reach the South Pole over land and the first to do it using motor vehicles.

You May Also Read: Peoples Who Changed the World

Previous articleWho are Entrepreneurs?
Next articleMedicines and Pharmaceutical Drugs