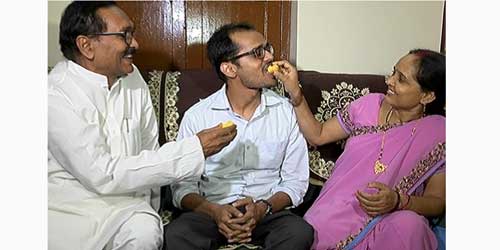 Vivek Kumar said, “I am very delighted to have cracked the Union Public Service Commission Exams. I did my MBBS and became a doctor but my interest was always in Civil Services.”

“It is all about what kind of values and ethics have been inculcated in children by parents. I wanted to break this myth that children of MLAs and MPs do not study and turn into brats.” the JD(U) MLA said.

Vivek Kumar comes from Nabinagar in Aurangabad. His father Virendra Kumar Singh, JD (United) MLA from Nabinagar in Aurangabad is too elated at his son’s achievements. His mother is a house maker. “Every father wants his son to do better in life than himself. I cannot describe how proud I feel that my son has achieved this feat,” a proud father said.

Initially, his father felt his son never studied. “I never saw him studying when he visited us during his vacations. It was only after he cleared his MBBS in 2010 and came to stay with us for UPSC preparation that I realised that he works hard,” his father said.

“I have represented Nabinagar thrice in the Assembly and was once elected MP from even Aurangabad. Despite having strong political background, Vivek never wanted to pursue my career and I never interfered in his studies too.” his father Virendra Singh said.

“He initially wanted to pursue an MD from the US, but there was some delay in getting a visa. By then, he expressed his interest to go for IAS. I told him it is tricky, but his mind was made,” the proud father said.

Vivek Kumar cracked UPSC Exam in his third attempt. In his first attempt, he cleared the Preliminary Exam. He had cleared the Mains Exam in his earlier second bid too but failed to crack the Interview round. He added he was done with the examination and is not planning a fourth attempt. “I am happy with my rank,” Vivek Kumar said.

Vivek Kumar says that he began his preparation for the Civil Services Exam in the last three-four years and managed to clear the Mains on both occasions but not the interviews. However, continued perseverance and hard work finally paid off this time.

His entire routine was totally different. Vivek Kumar studied at night and slept at mornings. He never cared about his health and his father had to ensure he ate on time.

Vivek Kumar said his two unsuccessful attempts did affect him but his family and friends help him cope with the pressure. Success in such examinations depends on how well you manage that pressure. My friends, relatives and family were my motivation.

“Despite being the son of a MLA, my father and mother ensured that I remained focused on my studies. They regularly monitored me and perhaps that helped me avoid turning into a brat”, Vivek Kumar declared.

Now, having cleared UPSC Exam, the doctor wishes to serve the people of Bihar if he get state cadre. He says having been born and brought up in Bihar, he understands the core issues well and perhaps may be able to serve even better.

Vivek Kumar advised future IAS aspirants from the state to keep working hard and be confident. “The examination pattern changes every year. So, it is important to study smart,” he said.