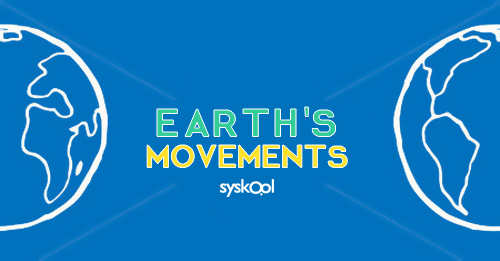 This is the movement of the Earth with the sun and the rest of the solar system in an orbit around the center of the Milky Way Galaxy. This movement has the little effect in changing the environment of the Earth.

Must Read: All About Earth

Rotation of the Earth

The Earth rotates (spins) around its axis. The axis is an imaginary line passing through the center of the Earth. Its two ends on the surface are called NORTH and SOUTH POLES. The Earth completes a rotation in 24 hours (23 hours, 56 minutes and 4 seconds to the exact).
The Earth rotates in an eastward direction opposite to the apparent movement of the sun, moon and stars across the sky. Looking down on a globe from above the North Pole, the direction of rotation is counter-clockwise (anti-clockwise direction). This eastward direction of rotation not only defines the movements of the zone of daylight on the Earth’s surface but also helps define the circulatory movements of the atmosphere and oceans.

The velocity of rotation of the Earth varies depending on the distance of a given place from the EQUATOR (the imaginary circle around the Earth halfway between the two poles). The rotational velocity at the poles is nearly zero. The greatest velocity of rotation is found at the Equator where the distance traveled by a point in 24 hours is largest, the velocity is about 1700 km per hour. At 60 degree parallel, it is half of what it is at the Equator (850 km per hour).

Rotation accounts for our alternating days and rights. While one-half of the Earth receives the light and energy of solar radiation, the other half would have been in darkness.

We are unaware of the speed of rotation, however, because—
(i) the rate is constant for each place on the Earth’s surface;
(ii) the atmosphere rotates with the Earth:
(Hi) there are no nearly objects, either stationary or moving at a different rate with respect to the Earth, to which we can relate the Earth’s movements.

Thus, without references, we are unable to perceive the speed of rotation. The line around the Earth separating the light and dark halves is known as the CIRCLE OF ILLUMINATION.

Also, Read: The Earth and the Moon

Revolution of the Earth

Earth also revolves around the sun in an elliptical, almost circular, orbit at an average distance from the sun of about 149,000,000 km. This motion is called REVOLUTION. The path in which the Earth describes its motion is called ORBIT. Because of the elliptical shape of the orbit, the distance varies from time to time. About January 3 the Earth is closest to the Sun and is said to be at PERIHELION (from Greek: ‘peri’ = close to; ‘helios’ = sun); its distance then from the sun is approximately 147 million km.

Around July 4 the Earth is about 152 million km from the sun. It is then that the Earth has reached its furthest point from the sun and is said to be at APHELION (Greek: ‘ap’ = away; ‘helios’ = sun). Five million km is insignificant in space and these varying distances from the Earth to the Sun do not materially affect the receipt of energy or Earth.

The Period of Revolution

The period of time the Earth takes to make one revolution around the Sun determines the length of one year. Earth takes to complete one revolution of the Sun in 365 days & 6 hours. Because the Earth makes 365 degrees rotations on its axis during the time it takes to complete one revolution of the Sun, a year is said to have 365 days. Because of the difficulty of dealing with a fraction of a day, it has been decided that a year would have 365 days and that in every fourth year, called LEAP YEAR, an extra day would be added in February.

Plane of Ecliptic, Inclination, and Parallelism