My account
Get into your account.
LoginRegister
Plans
Home Current Affairs National Food Security Bill Cleared By Cabinet Via Ordinance 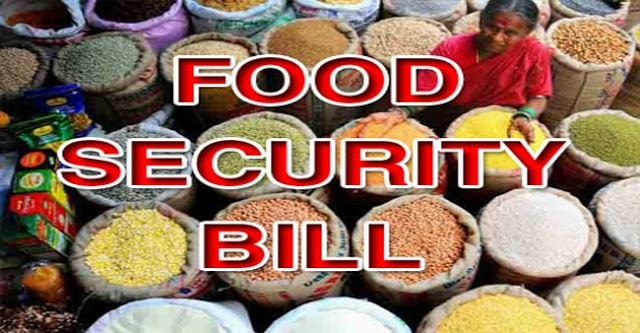 In a significant develop¬ment, the Union Cabinet on July 3, 2013, approved a proposal for promulgating an ordinance on the politically crucial National Food Security Bill. The much- hyped Bill seeks to legally entitle 67 percent of the country’s total population to subsidised food grains every month. The State Govern¬ments, which has been entrusted with the task of identifying the beneficiaries, will also implement the programme under the Targeted Public Distribution System. Once the President signs the ordinance, rules will be framed and the programme will be officially rolled out.

Read Also: GM Seeds: A Solution to Food Security
The programme will entitle a beneficiary to 5 kg of rice or wheat or millet a month at a discounted rate of Rs. 3, Rs. 2 and Re. 1, respectively. The 2.43 crore Antyodaya Anna Yojana beneficiaries (the poorest of the poor) will continue to avail their legal entitlement of 35 kg of food grains per household per month. Seventy-five percent population in rural areas and 50 percent population in urban areas will be covered under the programme. The scheme will take at least six months to be rolled out across the country as the States are yet to be prepared for its implementation. Besides, the Bill provides for maternity benefits of Rs. 6,000 a month. Children in the age group between 6 months and 14 years will get home ration or hot cooked food. The eldest woman in a home will be considered the head of the household for the purpose of issuing ration card.
Must Read:  Niti Aayog Task Force on Eliminating Poverty
The current below poverty line (BPL) and above poverty line (APL) categories, as also the ‘priority’ and ‘general’ categories, will be done away with under the new rules. Instead, there will be ‘inclusion’ and ‘exclusion’ criteria.
The implementation of the programme will result in an estimated annual food grain requirement of 612.3 lakh tonnes. The cost of it is budgeted at Rs. 1,24,724 crore for the 2013-14 financial year. Some estimates have shown that to implement the programme in a sustainable manner, it can cost Rs. 2,00,000 crore a year, because a host of other aspects will also have to be factored in. These include investment for stabilising production, creating infrastructure for storage and transportation, and upgrading of the public distribution system. Another significant factor is the expected increase in the minimum support price of foodgrains. According to experts, implementing the programme will have an enormous impact on the cereals market and the agricultural economy of the country. It will present a significant operational challenge to the authorities. It will hugely impact the finances of the government and further widen the akeady exorbitant subsidy bill.
Once the Food Security Bill is in place, India will join a select league of countries that guarantee food grains to a majority of their populations. The Cabinet approval for promulgating the ordinance brought to the end months of uncertainty regarding what has been billed as one of the most ambitious schemes ever seen in India. An attempt to push the Bill through during the later part of the Budget session in May 2013 had been thwarted by the Opposition parties including the B | P which had disrupted Lok Sabha proceedings.
Don’t Miss: Poverty Alleviation Programs in India
Another hurdle hindering the UPA Government from bringing in the law was the reservations its long-time ally Nationalist Congress Party (NCP) had about the Bill. However, when the government decided to take the ordinance route for the Bill, NCP supremo Mr. Sharad Pawar, who is the Union Agriculture Minister, fell in line. Mr. Pawar had earlier referred to his concerns about the Bill’s effects on agricultural production. Opposition parties— primarily the BJP and the Left—wanted the Bill to be discussed in Parliament. Despite all such oppositions, it was smooth sailing for the ordinance with all UPA members, including the dissenting ones, agreeing to go with the Cabinet’s decision.
The ordinance will have to be ratified within six weeks of the commencement of the next session of Parliament. It will have to be passed by both the Houses. Some analysts have opined that the decision to promulgate an ordinance suggests that the UPA Government could consider delaying the coming monsoon session of Parliament, because of the fact that it may need some time to garner support from various dissenting quarters. Parties such as the Samajwadi Party (SP) have already said that they would oppose the ordinance. SP termed the ordinance as ‘undemocratic’. The BJP said it was an “election gimmick”, while the CPI(M) described it as “an unnecessary step that shows contempt for Parliament”.
Such political rhetorics notwithstanding, it is hard to deny that the Bill, if implemented in a proper manner, can bring about myriad qualitative changes to the Hives of millions of starving Indians. The onus is on the authorities to make sure that this programme too does not end up like the leaky public distribution system did, fattening the coffers of middlemen while leaving unchanged the lives of the poor. Such a large- scale programme requires the presence of a foolproof system of checks and balances which will ensure that the benefits of the scheme reach the intended targets. This is the first and foremost aspect the government needs to keep in mind while implementing the programme.
Also, Read:
National Food Security Act: Work in Progress
Food and Agriculture Organisation (FAO)