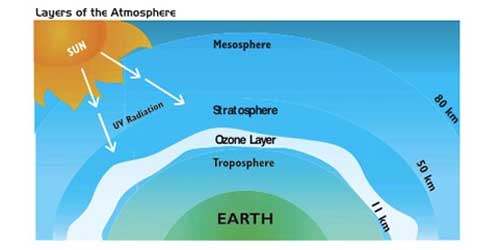 Ozone is a gas made up of molecules that are formed by three oxygen atoms. Its molecule formula is O3. Ozone is formed when the sunlight hits oxygen molecules (O2) and breaks them up into individual atoms. These individual atoms then join up with O2 molecules and make O3 or ozone.

Way up high in the Earth’s atmosphere called the stratosphere, there is a fairly high concentration of ozone molecules that are formed when the sun hits oxygen molecules. This part of the atmosphere is called the ozone layer.

Ozone molecules in the atmosphere provide us with important protection from the rays of the sun. Specifically, these molecules are good at absorbing certain ultraviolet rays that can cause sunburn and skin cancer.

Chlorofluorocarbons are a group of chemicals which are made up of only chlorine, fluorine, carbon, and hydrogen. They were first used as refrigerants to keep things cold. A lot of people considered CFCs miracle chemicals. Eventually, they were used in a variety of products including air conditioners, spray cans, fire extinguishers, and in manufacturing foams.

Unfortunately, CFCs can eventually find their way into the Earth’s atmosphere and the ozone layer. Once they get there they destroy ozone molecules and cause the ozone layer to become depleted or thinner.

In 1974 scientists, Sherry Rowland and Mario Molina discovered the link between the depletion of the ozone layer and CFCs. CFCs became somewhat regulated, but it wasn’t until 1987 that a treaty was formed called Montreal Protocol to try and stop the manufacture and use of CFCs throughout the world. CFCs were to be banned and completely eliminated in developing countries by the year 2000.

This will cause an increased risk of sunburn and skin cancer. Skin cancer can be very dangerous. For this reason, you should always wear sunscreen to protect your skin when you are outside in the sun for a long time. Strong ultraviolet rays can also damage your eyes. You can protect them by wearing sunglasses.

Things we can do to prevent CFCs

There isn’t much we can do about the CFCs that were released prior to the ban, but there are some things we can do:

Have a Look at: Pollution – Definition, Aspects and Solution

Facts About the Ozone Layer