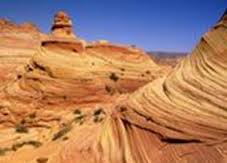 A plateau also called a high plain or tableland, is an area of highland, usually consisting of relatively flat terrain. Plateaus can be formed by a number of processes, including upwelling of volcanic magma, extrusion of lava, and erosion by water and glaciers. Magma rises from the mantle causing the ground to swell upward, in this way large, flat areas of rock are uplifted. Plateaus can also be built up by lava spreading outward from cracks and weak areas in the crust.

Plateaus can also be formed by the erosional processes of glaciers on mountain ranges, leaving them sitting between the mountain ranges. Water can also erode mountains and other landforms down into plateaus. High plateaus may also be partially a result of the feedback between tectonic deformation and dry climatic conditions created at the lee side of growing orogens.

Plateaus are classified according to their surrounding environment.

The largest and highest plateau in the world is the Tibetan Plateau, called the “roof of the world”, which is still being formed by the collisions of the Indo-Australian and Eurasian tectonic plates. The plateau is sufficiently high enough to reverse the Hadley cell convection cycles and to drive the monsoons of India towards the south.

The second-highest plateau is Deosai National Park and is located in the Skardu District of Gilgit-Baltistan, in northern Pakistan.

The third-largest plateau is the Antarctic Plateau, which covers most of the central Antarctica, where there are no known mountains, which very slowly spreads toward the coastline via enormous glaciers. This ice cap is so massive that echolocation sound measurements of the thickness of the ice have shown that large parts of the “dry land” surface of Antarctica have been pressed below sea level.

Plateaus dissected by rivers have remarkably uniform maximum elevations, but their surfaces can be interrupted by deep canyons. In the case of some regions described as plateaus, the surface is so dissected that one does not see any flat terrain. Instead, such a plateau is defined by a uniform elevation of the highest ridges and mountains. The eastern part of the Tibetan Plateau, which constitutes the headwaters of many of the great rivers of Asia, is dissected into deep canyons separated by narrow, steep ridges; the high uniform elevation that characterizes plateaus is only barely discernible in this area.

Plateau, the extensive area of flat upland usually bounded by an escarpment on all sides but sometimes enclosed by mountains. The essential criteria for plateaus are low relative relief and some altitude. Plateaus are extensive, and together with enclosed basins, they cover about 45 percent of the Earth’s land surface.

The formation of a plateau requires one of the same three types of tectonic processes that create mountain ranges—volcanism, crustal shortening, and thermal expansion. The simplest of these is thermal expansion of the lithosphere.

Plateaus of one type or another can be found on most continents. Those caused by thermal expansion of the lithosphere are usually associated with hot spots. The Yellowstone Plateau in the United States, the Massif Central in France, and the Ethiopian Plateau in Africa are prominent examples. Most hot spots are associated with the upwelling of hot material in the asthenosphere, and this hot upwelling not only heats the overlying lithosphere and melts holes through it to produce volcanoes but also uplifts the lithosphere. The relationship of such plateaus to hot spots ensures both a wide distribution of plateaus and an absence of belts of plateaus or of interrelated plateaus.

Why is it more difficult to breathe on mountains than on plains ?