My account
Get into your account.
LoginRegister
Plans
Home Current Affairs Political Transition in Myanmar: Recent Ethnic Clashes and Road Ahead 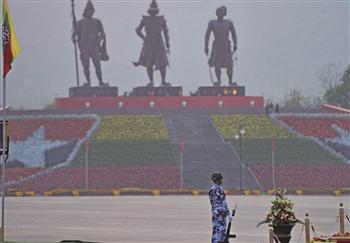 • President Thein Sein signed a law allowing peaceful demon¬strations for the first time. The NLD re-registered as a political party in advance of by-elections for Parliament held in 2012.
• Myanmar’s authorities have agreed a truce deal with rebels of Shan ethnic group and order the military to stop operations against ethnic Kachin rebels.
Year 2012
• January —The government signed a ceasefire with rebels of Karen ethnic group.
• A day later, hundreds of pri¬soners were released—among them the country’s most promi¬nent political prisoners, includ¬ing veterans of the 1988 student protest movement, monks invol¬ved in the 2007 demonstrations aitd activists from many ethnic minority groups.
• April—Taking part in an election 7for the first time since 1990, the
NLD won 43 out of 45 seats in landmark parliamentary by- elections seen as a major test for Myanmar’s reform drive. The polls are thought to have been generally free and fair.
• The US responded by easing sanctions on Myanmar. The EU also agreed to suspend most sanctions in Myanmar and opens an office in the biggest city, Rangoon.
International Reaction on Myanmar’s Political Transi¬tion
UNO—U.N. Secretary-General Ban Ki-moon made a landmark visit to a fast-changing Myanmar to encourage its government to carry out more democratic reforms and shore-up peace deals with ethnic rebel groups. Ban’s trip was his first since a reformist; quasi-civilian government took office a year ago, ending five decades of authoritarian military rule and frosty and frus¬trating ties with the international community.
Thein Sein government has started overhauling the tattered economy, easing media censorship, legalizing trade unions and protests, freeing political prisoners and agreeing ceasefires with more than a dozen ethnic rebel armies. Ban met Thein Sein and other former generals who were part of Than Shwe’s inner circle but now seen as key drivers behind Myanmar’s stunning facelift, which has led to an easing of some sanctions this month by the European Union, United States, Australia and Canada and a resumption of aid and debt relief by Japan.
European Union—European
diplomats are reported to have reached a preliminary agreenient to suspend most European Union sanctions against Myanmar. The final decision will be taken later on at a meeting of EU Foreign Ministers. But senior sources in Brussels have told the BBC they expect that there will be agreement to suspend a ‘big chunk’ of the current sanctions. Only the arms embargo would stay in place, they said. Aid and development money would be allowed into the country, as would investment into key parts of the economy particularly the mining and logging sectors. Exports from these industries would be allowed into the EU. There is also talk of establishing a preferential trade agreement with Myanmar.
EU foreign policy Chief Cathe¬rine Ashton met with Myanmar’s pro-democracy leader Aung San Suu Kyi, as she became the latest in a series of high-ranking international figures to visit the country. Recently, British Prime Minister David Cameron also visited Myanmar and called for a ‘suspension’ of the suffo¬cating economic sanctions slapped on the military rulers.
The United States—Secretary of State Hillary Clinton said some travel and financial restrictions would be relaxed, with Myanmar’s leaders allowed to visit the United States. Mrs. Clinton, who paid a visit to Myanmar last year, praised President Thein Sein’s ‘leadership and courage’. “We fully recognize and embrace the progress that has taken place and we will continue our policy of engage¬ment,” she said. Under the moves, the US will name an ambassador to Myanmar and establish an office for its Agency for International Develop¬ment in the country. The US would also begin ‘targeted easing’ of the ban on US financial services and invest¬ment in Myanmar, added Mrs. Clinton.
India and Myanmar—India, by contrast, has the most ground to make up, having neglected its eastern neighbour for years. And it could yet prove to be the country most affected by Myanmar’s opening. Certainly, India can draw on the ties of history. Millions of Indians settled and prospered in what was then called Myanmar when it was part of Britain’s vast Indian empire. Even after mass expulsions of Indians by Myanmar’s new military governments in the 1960s, there are still thought to be up to 3 million people of Indian descent in Myanmar. This is the sort of