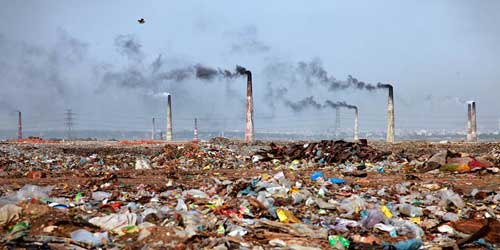 The addition of constituents to water, air or land, which adversely alter the natural quality of our environment is known as Pollution. Pollution may also be defined as an undesirable variation in the physical, chemical or biological characteristics of our water, air and land that may or will harmfully affect human life or that of desirable species, our industrial processes, living conditions and cultural assets, or that may or will waste or deteriorate our raw material resources.
Read Also: Startling Facts about Polution

Entire world can be considered as a single vast ecosystem of the universe consisting of two parts:
(I) Biotic Community (or Living Part)
That is the Biosphere in which life exists. The lack of living creatures and dis-balance in their life balance gives rise to the crises in the biological community.
(II) Abiotic Community (or Non-Living Part of Physical Environment)
The abiotic or physical environment of all organism existing on the earth exists in three zones: Atmosphere, Lithosphere, and Hydrosphere.

A. Harmful Gases in the Atmosphere

The concentration of harmful gases is increasing day by day in the atmosphere. Increasing Carbon dioxide content will warm up the earth atmosphere to such an extent that it will melt the polar ice and will cause a subsequent rise in sea level. Thus low line areas will be submerged, carbon dioxide is harmful to our health. Carbon mono-oxide, Sulpur dioxide, Hydrogen sulphide, Nitrogen oxide, Ozone etc also constitute the other harmful pollutant.

Dumping of tonnes of sewage, dead humans and animals and domestic wastes from cities into the water reservoirs are one of the major causer of water pollution. Discharge of untreated or partially treated sewage may cause: (a) depletion of oxygen content caused by biological oxidation of organic matter; and (b) stimulation of algae growth.
The above effects affects the diverse uses of water.

Insecticides used to kill insects which destroys (damages) our corps, spread several diseases in man, after spraying are washed off to the rivers and lakes and become a part fish body and other animal there. In the same way pollution of food grains by insecticides and pesticides and the various diseases caused by such food grains are also well known.
Must Read: Types of Polution

The air becomes foul by the exhaust from the internal combustion engines of automobiles used for personal conveyance, transport of goods and passenger traffic in the modern world. This polluted air is unhealthy for human and animal. Carbon monoxide is a deadly poisonous gas discharged from the automiles and factories is a serious problem in big cities of the world. It causes headaches, loss of vision, nausea, pain, convulsions, asthmatic spasm etc.

Fertilizers applied in the fields are also washed off into streams, rivers and the seas. Here they increase the growth of algae (algae is a microscopic green plan). This algae consumes the oxygen of water much more then they returned to water in dissolved state (during photosynthesis). In short supply of oxygen the animal living in water become suffocated.
Detergents also cause a serious problem to the fresh water resources. Major ingredients of most detergents are phosphates. When discharged into the water they support the luxuriant growth of algae.

Most Polluted Cities in India