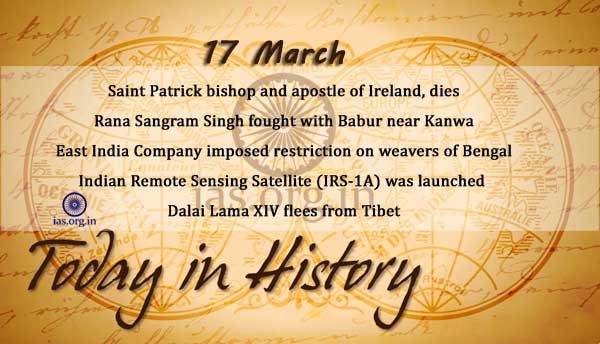 Rana Sangram Singh, King of Mewad, fought Babur near Kanwa at Agra and lost the battle and died thereafter. He had vowed not to enter Chittogarh without a victory.

To establish the business of English Mill’s Cloth, East Indiian Company had imposed various restriction on weavers of Bengal to destroy the Muslim and textile industry in Bengal , which was meant to destroy the Indian cloth and ‘malmal’ industry.

Salby Teaty was singed between Anderson (British) and Scindia for the Maratha and East India Company.

A powerful earthquake and a full day of aftershocks rock Taiwan on this day in 1906, killing over 1,200 people. This terrifying day of tremors destroyed several towns and caused millions of dollars in damages.

Indian troops retreat from Rathedaung to Buthidaung in the face of a renewed Japanese offensive on the Arakan front in Burma.

Indian Standard’s Institute started working to control the quality of Indian products and the ISI mark was issued to quality products.

First operational Indian Remote Sensing Satellite (IRS-1A) launched by a Russian Vostok. IRS system under National Natural Resources Management System (NNRMS) coordinated at national level by the Planning Committee of NNRMS (PC-NNRMS) and the data from IRS satellites is processed by the National Remote Sensing Agency, Hyderabad. SI, a US Company, also receives and markets IRS data worldwide under a commercial contract with Antrix Corporation of the Department of Space.

An international seminar on UN Peacekeeping was co-jointly hosted by Ministry of External affairs and Ministry of Defence at New Delhi from 17 to 19 March 1999. The seminar was conducted by HQ Army Training Command, Shimla on behalf of the Indian Army. A total of 126 foreign delegates from 71 countries participated in the seminar.