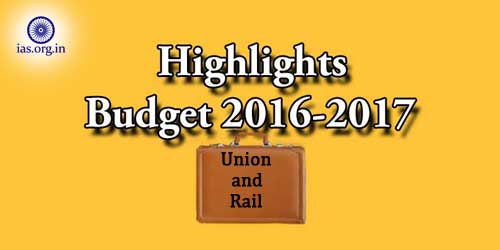 With a slew of budget go green measures, some of which are a follow up what had been introduced in the past, the Rail Budget 2016-17, presented by the Rail Minister, set the ball rolling. Some of the new concepts are designed to make the Railways enter budget go green culture in future.

According to the Rail Budget 2016-17, for advertisement billboards and all new lighting in non- traction areas, LED luminaire are going to be used to reduce energy consumption by 10-15 per cent. It has been pointed out that since LED lamps are recyclable and have a much longer life- span, having a low maintenance cost and consuming 75% less energy than the normal incandescent lighting, the move is certainly going to result in a lower carbon footprint.

All establishments with rooftop areas of more than 200 square meters are going to be provided with rainwater harvesting systems and all over the girder bridges are to be set up environment friendly composite sleepers which are made of recycled plastic waste. Apart from this, wind power plants of 132.5 MW and solar plants of a total 100 MW capacity are to be set up.

All production units of the Railways, at least one workshop in every Zone, are going to be transformed into budget go green industrial unit that would certainly assist in saving a great deal of energy and water.

The Railways has made its intention quite clear that it is going to promote floriculture and horticulture along the railway tracks; begin waste separation at railway stations; propagate awareness campaigns for cleanliness apart from setting up storage facilities on vacant land for fishermen and farmers.

In one of its most significant budget go green the Railways has decided to install 30,000 new bio- toilets in trains. For women and differently abled persons portable structures with bio-toilets are also to be set up.

Now passengers, courtesy Indian Railways, can make a request for ‘cleaning of berths and coaches’ through their mobile phones. And in a most important step with an intention to bring down the generation of paper to save trees the Rail Ministry has put in place a pilot scheme for sale of tickets through hand –hold terminals, e- ticketing for foreign debit/credit cards, bar coded tickets,scanners and access control.

In order to clamp down on pollution and pollutants, the Union Budget 2016-17 has come out with several bold measures that are meant to discourage the use of private cars, especially diesel- operated cars. To accomplish this move an infrastructure cess has been imposed on all cars- small petrol, LPG, and CNG cars will have to pay 1 per cent, diesel cars 2.5 per cent, and SUVs and higher engine capacity vehicles have to pay 4 per cent. Based on the polluter pays principle this certainly is a giant step ahead.

The Budget go green has also doubled the Clean Energy Cess on lignite and coal from Rs 200 per tonne to Rs 400 per tonne. This can be claimed as a welcome step as every awared citizen knows how polluting coal and generation of thermal power can be.

The budget go green has also made it clear that the Government intends to encourage organic farming through the Paramparagat Krishi Vikas Yojana  for which it has allotted more than Rs 400 crore.

The Government also aims to develop an organic value chain in the northeast in order to provide a fillip to the marketing of traditional organic products. This is going to help conserve water and forests because organic methods of farming minimize the use of water in comparison with the modern high yielding methods.

In all these steps, one can find a connection and coherence that has never been witnessed before. When the Railways talk of budget go green workshops, bio- toilets and budget go green production units among other budget go green measures, and the Finance Ministry plans of organic farming, renewable power and food security we can certainly say that the Government wants the various ministries to work in tandem with each other to accomplish the goal of making the country usher into the era of budget go green culture.