India is an agricultural country which mainly depend on the rainfall. Different regions of India receive the different amount of rainfall. Based on the amount of rainfall they receive annually, renowned climatologist Kendrew categorized various parts of the country into 3 rainfall regions. They are as follows:

The regions of the country which receive more than 200 cm of rainfall annually will come under the heavy rainfall regions. To receive such huge amount of rainfall some favourable conditions are needed like coastal location with mountain barriers, islands and many more. Let us take a look at them.

Must Read: Water Resources of India

The islands of India, Andaman & Nicobar Islands in Bay of Bengal and Lakshadweep Islands in the Arabian Sea receive a huge amount of rainfall as they are present in the midst of water and no need of monsoonal winds to generate rainfall.

The north eastern states of India (seven sister states) also come under heavy rainfall regions as there are mighty the Himalayas in the north to obstruct the monsoonal winds coming from the Bay of Bengal in the south.

We can find thick forests in the heavy rainfall regions of India. But, agriculture of main crops like rice and wheat cannot be done here due to the heavy wet surface.

The areas of the country which receive less than 100 cm of rainfall annually come under this category. These regions are again divided into two sub categories: 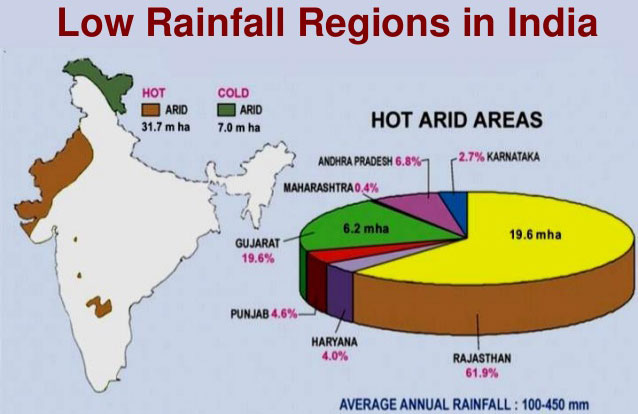 In addition to these some parts of Western India such as Eastern Rajasthan, Parts of Gujarat, Haryana and Delhi comes under this region. Only some agricultural crops can be grown here.

The Arid region includes the Great Indian Desert in Rajasthan, the Rann of Kutch in Gujarat and Leh&Ladakh regions in Jammu and Kashmir which sometimes don’t receive rainfall at all throughout the year.

In addition to the Himalayan region is also present which exhibits typical reception of annual rainfall that is it receive all types of rainfall mentioned above and thus the vegetation grown.

Thus, this classification of India based on the reception of annual rainfall helps us to plan our agriculture preferences, Dam construction regions and so on and hence of strategic importance.