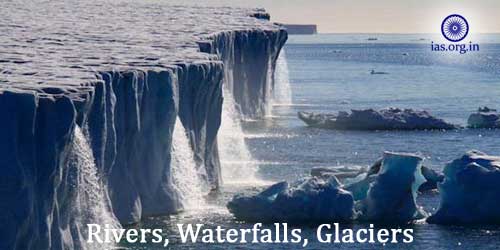 Rivers are originated high in the mountains where rain water or melting snow accumulates and makes tiny streams which in turn join together as they flow downhill and as more streams join the flow, the river becomes bigger and wider.

Rivers, the moment they get to the plains, slow down and they start turning and twisting forming meanders. As rivers approach the end of their journey they again, most of the times, split into small channels before they finally merge in the Ocean.

One of the most obvious facts about rivers that can be witnessed by any person having eyes is that rivers are always moving. It is not the case that rain always runs directly of the land into the rivers; sometimes, it immerses into the ground and comes out again lower down in the course of the river through holes called springs.

Rain is also frozen in snow, and when snow melts it makes the river run more faster. So from this very information it can be easily come to the conclusion that without rain every river is going to halt running. The natural equation is: ‘the more it rains, the fuller the river will be, and the faster it will run. However, as ‘too much of anything is bad’, too much rain can result in the overflow, causing flood, of rivers. Floods usually and naturally happen after heavy rains when the winter snow melts in spring.

A river starts turning and twisting, as it comes near the sea, forming the shape of a horseshoe called meanders. Some of the rivers meander more dramatically because when a river penetrates the plains and faces an obstacle, it starts moving more slowly than it does before and may simply curve around it. As rivers flow around this bend, the current gets strongest at inclines to pick up river bottom and soil from the bank and get it downstream.

As a river always flows downwards from its source from highland areas to lowland areas, through an upper, middle and finally lower course, it changes quite a bit in its journey towards the Ocean.

The upper course of river, that is close to its source, sprawls through mountain gorges forming  waterfalls and rapids. It is so fast and powerful that it carries away rocks, making valleys wider and deeper.

Its middle course start when a river enters the plain and its speed slows down. It starts flowing in smooth channels made from its own deposited material and starts meandering. As ‘the river starts winding across valley in loops and twists, tributaries join it.

When the river comes near the ocean its lower course starts in which it becomes even broader and slower. At its ends, the river may drop more sediment and break into small branches to form a delta. The mouth of the river, where it finally joins the sea, is known to be its estuary. As a river travels along its course, both river and the landscape around it changes.

Must Read: Water Resources in India

Role of Rivers in shaping the land

Running water of rivers, which play an important role in shaping the land, wears away the land over years forming deep valleys along the river. The valleys became wider because of the twists and turns of the river. These valleys, with the passage of time, become broad plains.

Plains are also built by sediment and silt which rivers carry down from mountain and deposit them. In this way rivers shape the land both by the wearing down and building up process. It is important to note here that the Indus River has pierced its way through the Himalayas shaping the mountain, and showing that water is a terrifically powerful force.

Glaciers, rivers of ice, moves so slowly that they can take a year to cover the distance that a human being can walk in few minutes. Icebergs are pieces of a broken piece of a glacier floating in water.

Glaciers are created high in mountain valleys and in polar regions where the snow falls but never melts. The heavy snow crushes the layers below into ice, that starts to glide slowly downhill as a glacier.

Since a glacier moves slowly, it grinds against the walls and the ground of the valley making it wide and deep. Glaciers cover approximately six million square miles that is about three percent of the earth’s surface.

Waterfalls, one the most breathtaking sights on the earth, are created as a river plunges over a ledge of rock, it thunders downwards in a plume of forthy white before going on its journey.

Waterfalls generally happen where the river flows over a band of hard rock. The charging water wears away the soft material on the surface and leave the harder layer below untouched. They are seen where a river bed drops abruptly and nearly vertical.

Waterfalls are termed differently according to their nature. A waterfall generally may also be called a falls. It may be called a cataract when large volumes of water are involved. Cascads are waterfalls of small height and less steepness or a series of small falls. Rabids, a type of waterfalls are still gentler stretches of river that display turbulent flow and white water.

Waterfalls are also formed in different ways. Some are formed by the action of glaciers; when the glaciers melt, rivers flowing along the channels, which are created by the smaller glaciers, have to dip downwards to penetrate the main river, that create waterfalls. Example of this kind of waterfalls is in Yosemite National Park in America. Waterfalls are also created by alternating layers of softer and harder rock. It suggests that the weaker rock downstream wears way faster than the harder rock upstream. The river becomes lower downstream and the river has to plunge over a steep cliff, forming a water fall.

Angel Falls is the highest waterfall in the world that plunges almost 960 metres down. It is located in Venezuela. Other famous waterfalls are Niagra Falls located on the border between the United States and Canada, and the Victoria Falls in Africa.