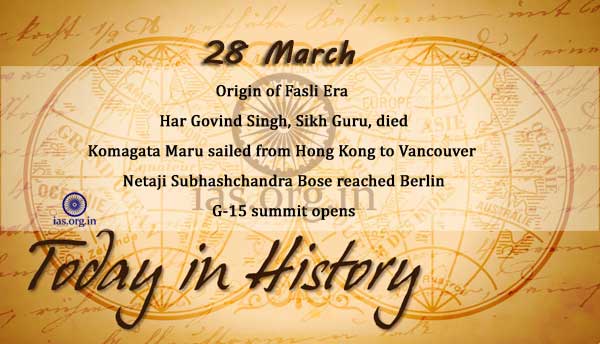 Upset by the Boston Tea Party and other blatant acts of destruction of British property by American colonists, the British Parliament enacts the Coercive Acts, to the outrage of American Patriots, on this day in 1774.

Komagata Maru sailed from Hong Kong to Vancouver with 351 Sikhs and 21 Punjabi Muslim youths under the captaincy of Sardar Gurjeet Singh as a part of ‘Ghadar’ Movement.

The flight undertook its first VVIP commitment, when it carried the first Prime Minister of India, the Late Pandit Jawaharlal Nehru, from Palam to Tilpat range and back to witness the ‘Fire Power Demo’. It carried wide spectrum of VVIPs, including the President, the Prime Minister, renowned statesmen, Generals, Luminaries and visiting foreign dignitaries.

At 4 a.m. the worst accident in the history of the U.S. nuclear power industry begins when a pressure valve in the Unit-2 reactor at Three Mile Island fails to close. Cooling water, contaminated with radiation, drained from the open valve into adjoining buildings, and the core began to dangerously overheat.

G-15 summit opens with only six heads of Government in New Delhi.

Final phase of repatriation of Chakma and other tribal refugees of the Chittagong Hill Tracts from Tripura begins.

Pakistan decides to ease visa restrictions for the aged, women and children from India in response to New Delhi’s move towards visa relaxation for several categories of Pakistani nationals.

Delhi police arrest Shoaib Ilyasi, producer of the crime serial ”India’s Most Wanted” for the death of his wife Anju on January 10.