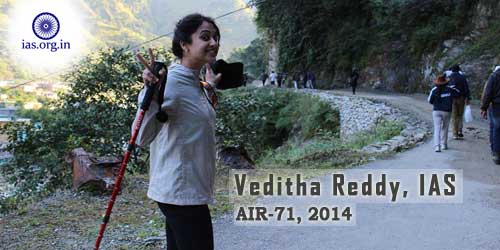 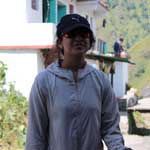 Viditha Reddy says that the backwardness of Srikakulam district is the inspiration to her to choose to become an IAS officer. She also like to work for the empowerment of Women. Veditha said that her inspiration is her parents motivated her to take AP cadre as her first option.

Interestingly, All the Top 4 Ranks have been occupied by Women (Ira Singhal, Renu Raj, Nidhi Gupta and Vandana Rao). Suharsha Bhagat is the only male candidate in Top 5 and he attained 5th Rank.

On the occasion, Veditha Reddy said she had chosen the IAS with an aim to do social service. She said that her parents also encouraged her towards achieving her aim. She also expressed her gratefulness to all those who blessed her.

Veditha Reddy completed her schooling from Dhadranagar and later shifted to Delhi Sanskriti Vidhyalaya for Secondary and Higher secondary education. Veditha Reddy is an engineering graduate in Electronics and Communications from Srikakulam district.

Veditha Reddy of 23 years had campaigned in support of her mother, who contested for the MP seat of Srikakulam during the general elections in AP during 2014. Veditha said that this campaign had inspired her to think what she can do to the oppressed sections of the society and to choose the Civils path. She participated in awareness camps in Ambedkar University and Padmavati Degree College in Narasannapeta.

Veditha Reddy took Anthropology as her optional paper though she was an engineering student. The students should choose interesting subjects to get good rank although they are studying other courses.

Veditha Reddy, an engineering graduate from Srikakulam district, was all set to become an IAS officer by bagging AIR-71 in the elite Civil Services Exams. She got selected technically in her first attempt after pursuing her Engineering.

Andhra Pradesh women’s top ranker of Civil Services Veditha Reddy said IAS can be achieved when aspirants would strongly believe their strengths and study in a systematic manner under the guidance of experts. She asked the candidates not to lose hope and never give scope for disappointment.