My account
Get into your account.
LoginRegister
Plans
Home Current Affairs Supreme Court’s Ruling on Drought in India 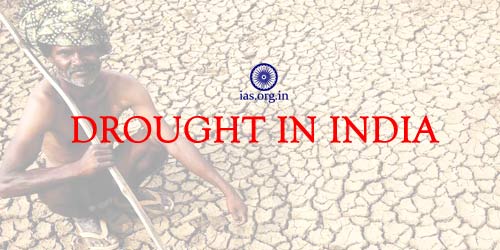 On Tuesday, the Supreme Court expressed its anguish over “Ostrich-like” attitude of the centre and some states, for poor drought management and preventive measures to cater relief to an estimated 50 crore affected people that is one third of the country’s population.

Passing various directions to the Central government the Supreme Court said that the Union government could not wash its hands of matter and pose to have done its duty by releasing some funds to the States.

A two-judges bench of the Supreme Court comprising Justice Madan B. Lokur and Justice N.V. Ramana expressing the bench’s serious concern said, “We are also quite surprised that the National Disaster Mitigation Fund (NDMF) has not yet been set up even after 10 years of the enforcement of the Disaster Management Act (2005). Risk assessment and risk management also appear to have little or no priority as far as the Union of India and State Governments are concerned”.

Must Read: Supreme Court Asks to Treat Drought as Disaster

Pretext of the SC ruling

While entertaining a Public Interest Litigation, filed by an organization Swaraj Abhiyan the Supreme Court has passed this ruling. The Swaraj Abhiyan in its PIL had complained of complete apathy by the Centre and various States which were affected by severe drought conditioned.

Supreme Court’s directions to the Centre

The Supreme Court instructed the centre to set up a National Disaster Response Force (NDRF) within six months from the date of the passing of its ruling, with an adequate and regular cadre strength.

Not only this the Supreme Court directed the Central Government to constitute a Disaster Mitigation Fund (DMF) within three months period and formulate a National Plan under Section 11 of the Disaster Management Act, 2005 as soon as possible.

The two-judges bench , with a tone of caution, further directed the Centre that the Disaster Management manual must be revised and updated on or before 31 December 2016 proving measures like “prevention, preparedness and mitigation”.

Showing its displeasure at the attitude of the Governments the bench said that a frank admission does not imply a loss of face or invite accusations of ineffective Governance –“it is an acknowledgement of reality. An ostrich-like attitude is a pity, particularly since the persons affected by a possible drought like situation usually belong to the most vulnerable section of the society.

The bench, further elaborating its stand, said that the sound of silence emanating from these States subjected the vulnerable to further distress. Mentioning the name of Gujarat the bench in its judgement remarked that “ironically, towards the fag end of the hearing, Gujarat finally admitted the existence of a drought in five districts – a fact that could have been admitted much earlier. But at least, it is better late than never. However, Bihar and Haryana continue to be in denial mode.

The Court even invoked an article of the Constitution of India and said, “the failure of these States to declare a drought (if indeed that is necessary) effectively deprives the weak in the State the assistance that they need to live a life of dignity as guaranteed under Article 21 of the Constitution.

What the Article 21 States

Dealing with Protection of life and personal liberty the Article 21 of the Constitution of India States that “No person shall be deprived of his life or personal liberty except according to procedure established by law”.

The Supreme Court in case in 1997 delivered a judgement that enhanced the scope of Article 21; it said that article 21 lays down that no person shall be deprived of life or personal liberty, except according to procedure established by law. “Life” in Article 21 is not merely the physical act of breating.

In 2011, in a ruling the Supreme Court said that Article 21 of the Constitution which guarantees protection of life and personal liberty can be said to be  “heart and Soul” of fundamental rights.

In fact, the importance of Article 21 can be comprehended by the sheer fact that under the protective lap of the Article 21 of the Constitution many ‘rights’ have found shelter, growth and nourishment. An intelligent citizen must be aware of the developments in this matter, as they have evolved from judicial decisions.

Although the Disaster Management Act, 2005 was passed in December 2005 by both Houses of the Parliament, it came into force after getting assent from the President of India on 9 January, 2006.

The Act has 11 Chapter and 79 sections and extends to the whole of India. The Act has been promulgated for “effective management of disasters and for matters connected therewith or incidental thereto.

National Authority under the DM Act, 2006

Under clause 1 of section 3 of the Disaster Management Act, 2005 a National Disaster Management Authority (NDMA), under the chairmanship of the Prime Minister, was establish on 27 September 2006 for “laying down the policies, plans and guidelines for disaster management” and to ensure “timely and effective response to disaster”.

Section 6 of the DM Act says that NDMA is responsible for laying “down guidelines to be followed by the State Authorities in drawing up the State Plans”.

The section 42 of the DM Act, 2005 asks for setting up a National Disaster Response Force (for which the judgement on Wednesday also asked for) for the purpose of specialist response to a threatening disaster situation or disaster”. Sections 46-50 mandate funds for Disaster Mitigation at various levels.