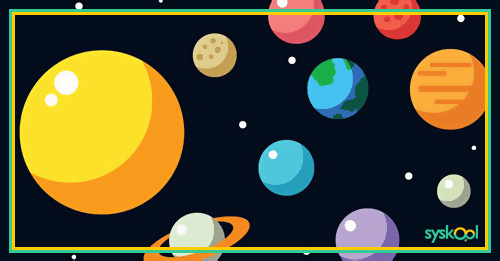 The Solar System formed billion years ago from the gravitational collapse of a region within a large molecular cloud. This initial cloud was likely several light-years across and probably birthed several stars. As is typical of molecular clouds, this one consisted mostly of hydrogen, with some helium, and small amounts of heavier elements fused by previous generations of stars. As the region that would become the Solar System.

Our solar system consists of an average star we call the Sun, the planets Mercury,   Venus, Earth, Mars, Jupiter, Saturn, Uranus, Neptune, and Pluto. It includes the satellites of the planets; numerous comets, asteroids, and meteoroids; and the interplanetary medium.

Ancient astronomers observed points of light that appeared to move among the stars. They called these objects “planets,” meaning wanderers, and named them after Roman deities—Jupiter, king of the gods; Mars, the god of war; Mercury, messenger of the gods; Venus, the goddess of love and beauty, and Saturn, father of Jupiter and god of agriculture. The stargazers also observed comets with sparkling tails, and meteors or shooting stars apparently falling from the sky.

The four planets closest to the sun—Mercury, Venus, Earth, and Mars—are called the terrestrial planets because they have solid rocky surfaces. Jupiter, Saturn, Uranus, and Neptune are known as the Jovian (Jupiter-like) planets, because they are all gigantic compared with Earth, and they have a gaseous nature like Jupiter’s. The Jovian planets are also referred to as the gas giants, although some or all of them might have small solid cores.

The Sun is the richest source of electromagnetic energy (mostly in the form of heat and light) in the solar system. The Sun’s nearest known stellar neighbour is a red dwarf star called Proxima Centauri, at a distance of 4.3 light years away. The whole solar system, together with the local stars visible on a clear night, orbits the center of our home galaxy, a spiral disk of 200 billion stars we call the Milky Way.

The Milky Way has two small galaxies orbiting it nearby, which are visible from the southern hemisphere. They are called the Large Magellanic Cloud and the Small Magellanic Cloud. The nearest large galaxy is the Andromeda Galaxy. It is a spiral galaxy like the Milky Way but is 4 times as massive and is 2 million light years away. Our galaxy, one of the billions of galaxies known, is travelling through intergalactic space.

Mars is the fourth planet from the Sun and the second smallest planet in the Solar System.

Jupiter, the largest planet in our solar system, is 318 times larger than Earth.

Saturn is the sixth planet from the Sun and the second largest.

The orbital speed of Uranus is 6.6 km/sec

Neptune is the fourth largest planet and the coolest planet in the Solar System.

Pluto is the smallest planet in the Solar System, now consider as dwarf planet

India Launches 6th IRNSS Satellite All You Need to Know