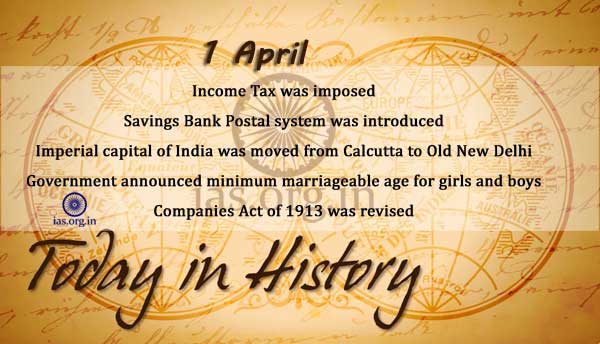 Medical College Hospital in Calcutta having only 20 beds was opened for male patients .

The imperial capital of India was moved from Calcutta to Old New Delhi and the Province of Delhi was declared by a proclamation.

Government announced 15 yrs and 18 yrs as minimum marriageable age for girls and boys. This is presently remodified.

Indian Air Force was established at Drigh Road in Karachi (now in Pakistan). Subroto Mukherjee and four other officers were inducted as pilots when the first Indian Air Force Squadron was formed. The first aircraft flight joined the Indian Air Force, at that time it possessed a strength of six RAF-trained officers and 19 Havai Sepoys (literally, air soldiers); its aircraft inventory comprised four Westland Wapiti II. A army co-operation biplaned at Drigh Road as the “”A”” Flight nucleus of the planned No.1 (Army Co-operation) Squad

The Reserve Bank of India was established as a Central Bank and the job of issuing notes was entrusted to this bank. The Commissioner’s office which issued currency was abolished and was substituted by the Governer of the RBI. The issue offices scattered around the country came to be called as the regional offices of the Reserve Bank.

Orissa state was formed as a province of British India separating from Bihar.

Postage stamps and sale of postal stationary was introduced as per decimal coinage system and Rupee was established to Hundred Naya Paisa.

Television was separated from radio, and Doordarshan Corporation was established.

UN Peace-keeping Force arrives in Windhoek to prefare for independence of Namibia.