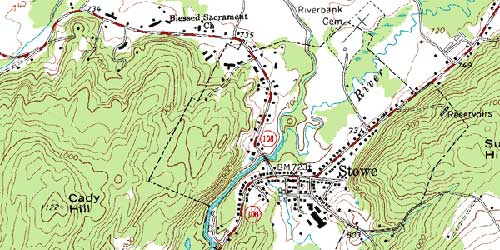 Topography describes the physical features of an area of land. These features typically include natural formations such as mountains, rivers, lakes, and valleys. Man-made features such as roads, dams, and cities may also be included. Topography often records the various elevations of an area using a topographical map.

Topography studies the elevation and location of landforms.

A topographical map is one that shows the physical features of the land. Besides just showing landforms such as mountains and rivers, the map also shows the elevation changes of the land. The Elevation is shown using contour lines.

When a contour line is drawn on a map it represents a given elevation. Every point on the map touching the line should be the same elevation. On some maps, numbers on the lines will let you know what the elevation is for that line.

There are a number of ways that information is gathered to make topographical maps. They can be divided into two primary methods: direct survey and indirect survey.

Direct survey – A direct survey is when a person on the ground uses surveying equipment, such as levels and clinometers, to directly measure the location and elevation of the land. You have probably seen a surveyor along the road sometimes making measurements by looking through a leveling instrument sitting on a tall tripod.

Also Read: The Ocean and The Sea: Forms and Benefits

Topography has a number of uses including:

Types of Indian soils and their distribution