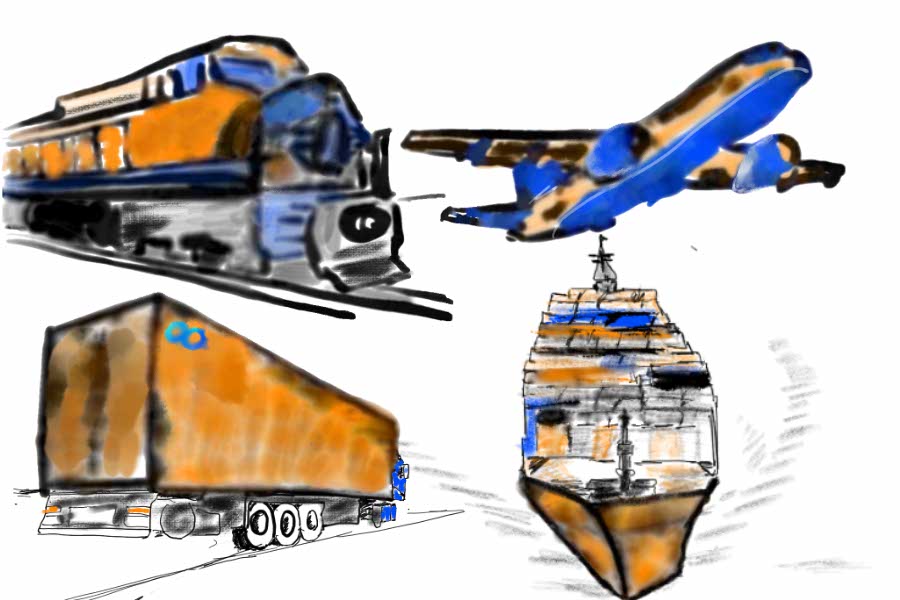 India’s Transport Sector, as it caters to the need of nearly 1.1 billion people, is large and diverse. A smooth and co-ordinated system of transportation plays an important role in the sustained economic growth of a country. The present Transport system of India includes road, rail, coastal shipping, air transport, etc. Transportation in India has registered a solid growth over the years both in speed of network and in output of the system. It is the responsibility of the Ministry of Shipping, Road Transport and Highways to formulate and implement the policies and programmes for the development of various mode of transportation except railways and civil aviation.

Roads, the dominant mode of the transportation in India , carry almost 90% of the country’s passenger traffic and 65% of its freight. The country’s roads network includes National Highways, State Highways, major/other district roads and village/rural roads.

The density of India’s highways network, at 0.66 km of highway per square kilometer of land, is much greater than China’s (0.06) or brazil’s (0.20) and Similar to that of the United States (0.65). most of the highways in India are, however, narrow and congested with poor surface quality. It is important to note here that about 40% of villages of India do not have access to all weather roads.

Indian Railways, the largest system in the world under a single management, functions as the principal mode of transportation for freight and passengers, and brings together people from the remotest corners of the country and make possible conduct of business, education, sightseeing and pilgrimage.

The network of India’s Railways is the 4th longest and the heavily used transportation in the world. According to an estimate of 2018, Indian Railways transported 8.26 billion passengers and transported 1.16 billion tonnes of freight annually.

Rail services in India was first initiated in 1853. These services are catered by the state run India Railways under the supervision of the Ministry of Railways. By 1947, there were forty-two rail systems in the country. The system was nationalized as one unit in 1951, thus becoming one of the largest network in the world. Indian Railways is separated into seventeen zones including Kolkata Metro Railway. The Indian Railway have been further sub-divided into sixty seven divisions, each having a divisional headquarters. Although the Railways play a leading role in carrying passengers and cargo across India’s vast territory, most of its major corridor have capacity constraint that require capacity advancement plans.

India has 125 airports that include II international airports also. It is the responsibility of the Ministry of Civil Aviation to formulate national policies and programmes for development and regulation of civil aviation and for planning and implementing schemes for orderly growth and expansion of civil air transport.

The Ministry’s other functions are to monitor and regulate the provisions for airport facilities, air traffic services, safeguarding civil aviations operations, carriage of passengers and goods by air, regulations of air transport services, licensing of aerodromes, air carriers, pilots and aircrafts maintenance engineers.

The Ministry of Civil Aviation (MCA) has got the power to administratively control the responsible for the safety in rail travel and operations in terms of provisions of the Railways Act.

India is and has been a member of International Civil Aviation Organization (ICAO) and also on the council of ICAO since its operations. The civil aviation sector has three chief functional divisions- regulatory, infrastructural and operational.

Shipping, as a mode of transportation in India, plays an important role in the transport sector of India. About 90 percent of the country’s trade by volume (70 Percent in terms of value) is carried by sea. Among the developing countries, India possesses the largest merchant shipping fleet. India ranks 20th amongst the countries with the largest cargo carrying fleet.